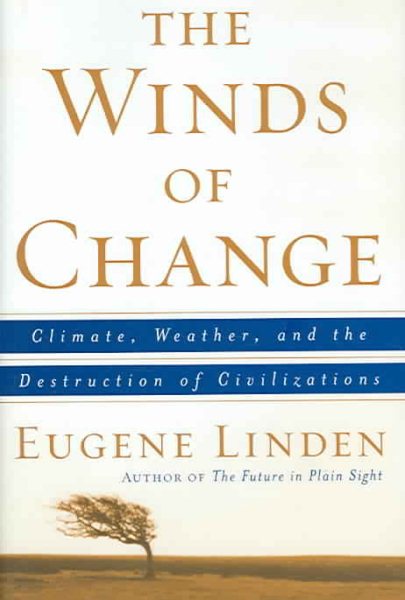 A concise history of significant world events that occurred as a direct result of climate changes describes lost societies in Greenland, central America, and central Africa, in a cautionary account that evaluates the present world's readiness for threatening climate changes. By the author of The Octopus and the Orangutan. 35,000 first printing Read More
The Winds of Change places the horrifying carnage unleashed on New Orleans, Mississippi, and Alabama by Hurricane Katrina in context.Climate has been humanity's constant, if moody, companion. At times benefactor or tormentor, climate nurtured the first stirrings of civilization and then repeatedly visited ruin on empires and peoples. Eugene Linden reveals a recurring pattern in which civilizations become prosperous and complacent during good weather, only to collapse when climate changes -- either through its direct effects, such as floods or drought, or indirect consequences, such as disease, blight, and civil disorder.The science of climate change is still young, and the interactions of climate with other historical forces are much debated, but the evidence mounts that climate loomed over the fate of societies from arctic Greenland to the Fertile Crescent and from the lost cities of the Mayans in Central America to the rain forests of Central Africa. Taking into account the uncertainties in both science and the historical record, Linden explores the evidence indicating that climate has been a serial killer of civilizations. The Winds of Change looks at the present and then to the future to determine whether the accused killer is on the prowl, and what it will do in the future.The tragedy of New Orleans is but the latest instance in which a region prepared for weather disasters experienced in the past finds itself helpless when nature ups the ante. In the closing chapters, Linden explores why warnings about the dangers of climate change have gone unheeded and what is happening with climate today, and he offers perhaps the most explicit look yet at what a haywire climate might do to us. He shows how even a society prepared to absorb such threshold-crossing events as Katrina, the killer heat wave in Europe in 2003, or the floods in the American Midwest in the 1990s can spiral into precipitous decline should such events intensify and become more frequent.The Winds of Change places climate change, global warming, and the resulting instability in historical context and sounds an urgent warning for the future. Read Less

Goodreads reviews for The Winds of Change: Climate, Weather, and the Destruction of Civilizations

The Parrot's Lament and Other True Tales of Animal Intrigue,...

The Winds of Change: Climate, Weather, and the Destruction o...