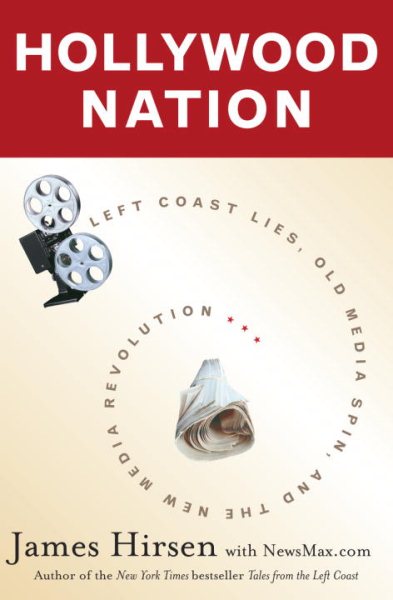 A conservative spokesperson examines how the line between news and entertainment has become blurred, as well as how the situation has allowed the liberal media to present their political views within entertainment product. Read More
Now entering Hollywood Nation—where fact blurs with fiction, virtue with viceMillions of Americans are outraged by the radical politics of self-appointed celebrity pundits like Michael Moore, Barbra Streisand, Sean Penn, and Susan Sarandon. And actually, these stars’ public pronouncements could be the least of our worries, as New York Times bestselling author and media critic James Hirsen reveals in Hollywood Nation.Now more than ever, Hirsen shows, Hollywood elites are blurring the lines between entertainment and news to force their views onto the rest of the country. With their politically charged films, distorted documentaries, and skewed docudramas, they’re trying to set the agenda with little regard for the truth. Even worse, many so-called journalists are doing the same thing, dangerously mixing information and entertainment in an attempt to ratchet up ratings—and to inject their own views into the news.Hollywood Nation also reveals how the New Media are now leading the counterattack against the relentless liberal assault that comes from East Coast newsrooms and Left Coast studios. Through his extensive research and exclusive interviews with news and entertainment iconoclasts—including Bill O’Reilly, Mel Gibson, Ann Coulter, Dick Morris, Peggy Noonan, Laurie Dhue, and many others—Hirsen shows how liberals can no longer dominate the political and cultural debates. With a sharp eye and a keen wit, Hirsen takes the reader on a fun and fascinating journey through this Hollywood nation of ours. Along the way you’ll discover:•How mainstream media figures’ fame fundamentally distorts the delivery of news•How far news organizations are going in their quest to sex things up—and what celebrity journalists are saying about the plastic surgery push •An exclusive behind-the-scenes account of Mel Gibson’s The Passion of the Christ—a fascinating story that captures how the Left is finally losing its stranglehold on information•A cable news journalist spilling the beans about a rival news channel’s commercial stunt•How Michael Moore’s films are heralding a new trend toward over-the-top liberal propaganda—but how a newly emerging conservative Hollywood is fighting back•How the New Media are shaking things up and evening things outThese days we’re just one big Hollywood nation. James Hirsen reminds us all that we need to pay attention to the Hollywood influence—not least because we must combat it. Read Less