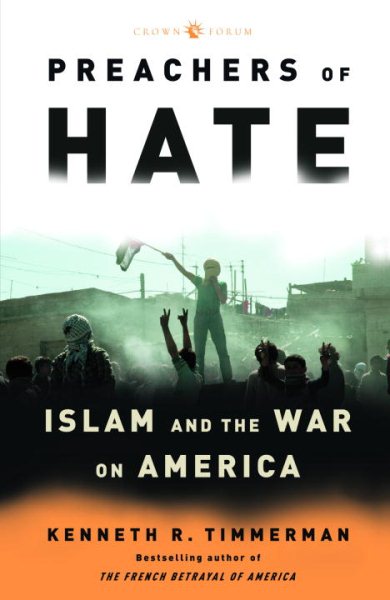 The best-selling author of Shakedown and Death Lobby provides a compelling study of anti-Semitism and its danger to not only Jews but also to the Western way of life, examining the extent of the problem in the Middle East, the history of anti-Semitism, and its threat to global peace and security. Reprint. 25,000 first printing. Read More
Timmerman, an investigative reporter who has written extensively about the Middle East for more than two decades, goes deep inside the Arab world to reveal the depth and extent of anti-Semitic hatred there—and to expose how the “new” anti-Semitism means not just hatred of Jews but also hatred of America and the West. From Saudi Arabia to Egypt to Lebanon, vicious anti-Semitic and antiAmerican propaganda is spewing forth from the preachers of hate: Muslim clerics, government newspapers, government television networks, and even government officials. Many Muslim leaders are not simply encouraging the hatred; they are actually spending vast sums of money to spread the lies that spawned the terrorists responsible for the September 11 attacks on America, the March 2004 Madrid bombing, and the May 2004 attack that killed six Westerners in Saudi Arabia.Even more troubling, the hatred has spread throughout Europe and even to the United States. Timmerman has uncovered jaw-dropping examples of this anti-Semitic and anti-American hatred in this country, including at some of our most prestigious universities.Preachers of Hate shows how the United States is suffering many defeats in the war on terror precisely because we continue to ignore this very real threat. Read Less

Goodreads reviews for Preachers of Hate: Islam and the War on America

Countdown to Crisis: The Coming Nuclear Showdown with Iran

Shadow Warriors: The Untold Story of Traitors, Saboteurs, an...