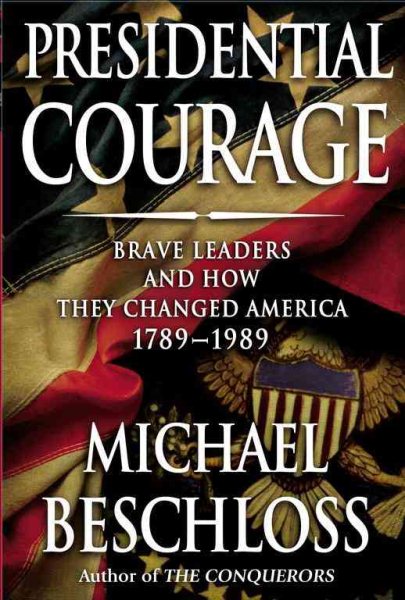 Documents crucial historical moments in each of the first forty presidencies during which the future of the United States has been dramatically affected by a bold executive decision, and offers insight into the factors that influenced the choices made by each president. Read More
From the acclaimed bestselling author of The ConquerorsMichael Beschloss has brought us a brilliantly readable and inspiring saga about crucial times in America's history when a courageous President dramatically changed the future of the United States.With surprising new sources and a dazzling command of history and human character, Beschloss brings to life these flawed, complex men -- and their wives, families, friends and foes. Never have we had a more intimate, behind-the-scenes view of Presidents coping with the supreme dilemmas of their lives.You will be in the room with the private George Washington, braving threats of impeachment and assassination to make peace with England. John Adams, incurring his party's "unrelenting hatred" by refusing to fight France and warning his enemies, "Great is the guilt of an unnecessary war." Andrew Jackson, in a death struggle against the corrupt Bank of the United States. Abraham Lincoln, risking his Presidency to insist that slaves be freed.Beschloss also shows us Theodore Roosevelt, taunting J. P. Morgan and the Wall Street leaders who dominated his party. Franklin Roosevelt, defying the isolationists -- and maybe the law -- to stop Adolf Hitler. Harry Truman, risking a walkout by top officials to recognize a Jewish state. John Kennedy, the belated champion of civil rights, complaining that he has cost himself a second term. And finally, two hundred years after Washington, Ronald Reagan, irking some of his oldest backers to seek an end to the Cold War.As Beschloss shows in this gripping and important book, none of these Presidents was eager to incur ridicule, vilification or threats of political destruction and even assassination. But in the end, bolstered by friends and family, hidden private beliefs and, sometimes, religious faith, each ultimately proved himself to be, in Andrew Jackson's words, "born for the storm." Read Less

Goodreads reviews for Presidential Courage: Brave Leaders and How They Changed America 1789-1989

Presidential Courage: Brave Leaders and How They Changed Ame...

The Conquerors: Roosevelt, Truman and the Destruction of Hit...

Kennedy and Roosevelt: The uneasy alliance