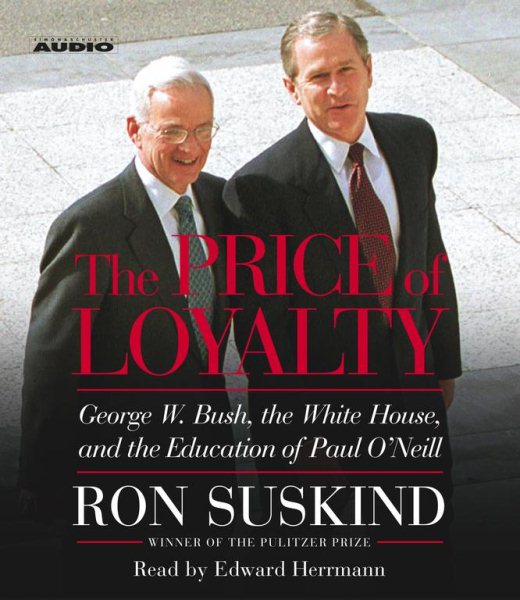 The Pulitzer Prize-winning journalist provides a provocative odyssey behind the scenes of the White House to reveal the inner operations of the administration of George W. Bush, furnishing a close-up view of the president and his advisors as they develop key domestic policies and global strategies during a turbulent period of history. Simultaneous. Read More
A Pulitzer Prize-winning reporter's explosive account of the inner workings of the George W. Bush administration, the most secretive White House of modern times. This vivid, unfolding narrative includes the candid assessments of former U.S. Treasury Secretary Paul O'Neill, for two years the administration's top economic official, a principal of the National Security Council, and a tutor to the new President. He is the only member of Bush's innermost circle to leave and then to agree to speak frankly about what has really been happening inside the White House. O'Neill's account is supported by Suskind's interviews, by transcripts of meetings and by voluminous documents that cover domestic and foreign policy. As listeners are taken to the very epicenter of government, The Price of Loyalty offers a definitive view of Bush and his closest advisers as they manage crucial domestic policies and global strategies at a time of life-and-death crises. Dick Cheney, Karl Rove, Donald Rumsfeld, Condoleezza Rice, Colin Powell, and Christine Todd Whitman are seen in an intimate, "unmanaged" way -- as is Fed Chairman Alan Greenspan, O'Neill's close friend and ally. The central conflicts of this administration's governance are starkly visible through the lens of recent events and the revelation of unseen intentions that underlie actions. Suskind's unique access provides an astonishing account of a President so carefully managed in his public posture that he is unknown to most Americans. Now, he will be known. Read Less

Goodreads reviews for The Price of Loyalty: George W. Bush, the White House, and the Education of Paul O'Neill

A Hope in the Unseen: An American Odyssey from the Inner Cit...

The Price of Loyalty: George W. Bush, the White House, and t...