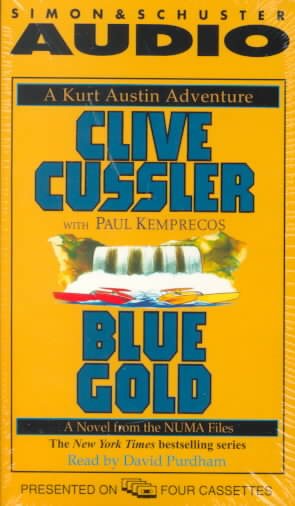 Kurt Austin and his NUMA team must track down extortionists and rescue scientist Francesca Carval, whose plane has vanished over South America along with her revolutionary formula to convert the world's salt water to fresh. Read More
Kurt Austin and his crew are back to slake their thirst for action as they attempt to drown an eco-extortionist's plan to control the world's freshwater supply. From deep within the Venezuelan rain forest emanates the legend of a white goddess and a mysterious tribe with startling technical accomplishments. Few believe the tribe exists -- and even fewer suspect its deity can change the course of history. For National Underwater & Marine Agency crew leader Kurt Austin, an investigation into the sudden deaths of rare whales leads him to the Mexican coast. Meanwhile, in South America's lush hills, a specially assigned NUMA crew turns up the white-goddess legend -- and a murderous cadre of bio-pirates intent on stealing medicinal secrets worth millions. Soon Austin and his crew realize they're working the opposite ends of the same grand scheme. A California agribusiness tycoon is poised to rise to power by monopolizing the earth's depleted freshwater reserves and dominate the world. Austin has a hunch the mythical tribal goddess may be the key to locating a secret formula that could turn seawater into fresh. But with each step into the bush, he and his NUMA team feel like fish out of water -- and must fight a trail of enemies through a dense jungle of treachery and murder. Read Less

Goodreads reviews for Blue Gold: A Novel from the NUMA Files