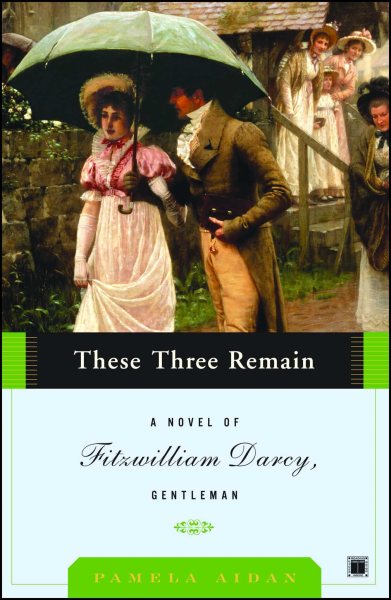 Follows Darcy's journey of self-discovery after Elizabeth Bennet's rejection of his marriage proposal, a period during which he hopes to renew his suit and finds his resolve tested by the machinations of Wickham. Read More
This thrilling conclusion to the Fitzwilliam Darcy, Gentleman trilogy recounts the climactic events of Jane Austen’s Pride and Prejudice from its enigmatic hero’s point of view.One of the most beloved romantic heroes in all of literature, Fitzwilliam Darcy remains an enigma even to Jane Austen’s most devoted fans. But with this concluding volume in the Fitzwilliam Darcy, Gentleman trilogy, novelist and Austen aficionada Pamela Aidan at last gives readers the man in full. These Three Remain follows a humbled Darcy on the journey of self-discovery after Elizabeth Bennet’s rejection of his marriage proposal, in which he endeavors to grow into the kind of gentleman he’s always dreamed of being. Happily, a chance meeting with Elizabeth during a tour of his estate in Derbyshire offers Darcy a new opportunity to press his suit, but his newfound strengths are put to the test by an old nemesis, George Wickham. Vividly capturing the colorful historical and political milieu of the Regency era, Aidan writes in a style evocative of her literary progenitor, but with a wit and humor very much her own. While staying faithful to the people and events in Austen’s original, she adds her own fascinating cast of characters, weaving a rich tapestry out of Darcy’s past and present that will beguile his admirers anew. Read Less

Goodreads reviews for These Three Remain: A Novel of Fitzwilliam Darcy, Gentleman

An Assembly Such as This: A Novel of Fitzwilliam Darcy, Gent...

Duty and Desire: A Novel of Fitzwilliam Darcy, Gentleman