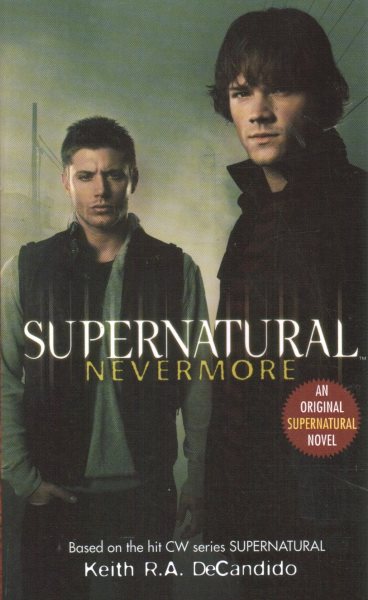 Brothers and demon hunters, Sam and Dean arrive in New York to investigate a local musician's haunted house, but find themselves drawn into a series of murders that are somehow related to stories by Edgar Allen Poe. Read More
Twenty-two years ago, Sam and Dean Winchester lost their mother to a mysterious and demonic supernatural force. In the years after, their father, John, taught them about the paranormal evil that lives in the dark corners and on the back roads of America...and he taught them how to kill it. Sam and Dean have hit New York City to check out a local rocker's haunted house. But before they can figure out why a lovesick banshee in an '80s heavy-metal T-shirt is wailing in the bedroom, a far more macabre crime catches their attention. Not far from the house, two university students were beaten to death by a strange assailant. A murder that's bizarre even by New York City standards, it's the latest in a line of killings that the brothers soon suspect are based on the creepy stories of legendary writer Edgar Allan Poe. Their investigation leads them to the center of one of Poe's horror classics, face-to-face with their most terrifying foe yet. And if Sam and Dean don't rewrite the ending of this chilling tale, a grisly serial killer will end their lives forevermore. Read Less

Supernatural: Heart of the Dragon

By DeCandido, Keith R. A.

By DeCandido, Keith R. A.