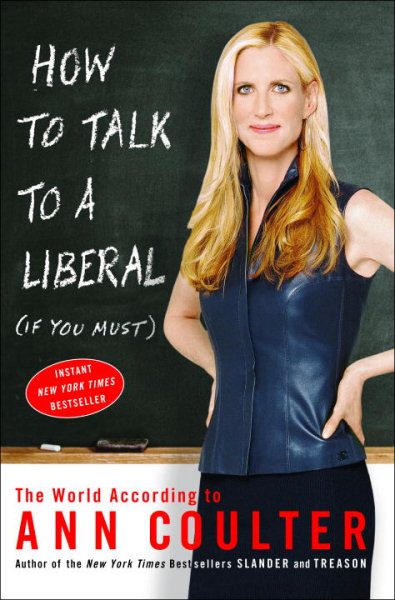 The conservative columnist shares her thoughts on topics from political correctness and foreign policy to the media, in a collection of her commentaries accompanied by responses from readers on both sides of the political spectrum. Read More
Welcome to the world of Ann Coulter. With her monumental bestsellers Treason, Slander, and High Crimes and Misdemeanors, Coulter has become the most recognized and talked-about conservative intellectual in years—and certainly the most controversial. Now, in How to Talk to a Liberal (If You Must), which is sure to ignite impassioned debate, she offers her most comprehensive analysis of the American political scene to date. With incisive reasoning, refreshing candor, and razor-sharp wit, she reveals just why liberals have got it so wrong.In this powerful and entertaining book, which draws on her weekly columns, Coulter ranges far and wide. No subject is off-limits, and no comment is left unsaid. After all, she writes, “Nothing too extreme can be said about liberals because it’s all true.” How to Talk to a Liberal (If You Must) offers Coulter’s unvarnished take on: •The essence of being a liberal: “The absolute conviction that there is one set of rules for you, and another, completely different set of rules for everyone else.”•John Kerry: “A reporter asked Kerry, ‘Are you for or against gay marriage?’ As usual, his answer was, ‘Yes.’ ”•Her 9/11 comments: “I am often asked if I still think we should invade their countries, kill their leaders, and convert them to Christianity. The answer is: Now more than ever!”•The state of the Democratic Party: “Teddy Kennedy crawls out of Boston Harbor with a quart of Scotch in one pocket and a pair of pantyhose in the other, and Democrats hail him as their party’s spiritual leader.” •Her philosophy for arguing with liberals: “Tough love, except I don’t love them. My ‘tough love’ approach is much like the Democrats’ ‘middle-class tax cuts’—everything but the last word.”•The “Treason Lobby”: “Want to make liberals angry? Defend the United States.”In this full-on Coulterpalooza, you’ll find the real, uncensored Ann Coulter. A special concluding chapter even includes the pieces that squeamish editors refused to publish—“what you could have read if you lived in a free country,” says Coulter. How to Talk to a Liberal (If You Must) is a stunning reminder of why Ann Coulter’s commentary has achieved must-read status.“A fluent polemicist with a gift for Menckenesque invective...and she can harness such language to subtle, syllogistic argument.”--Washington Post Book World“Ann Coulter is a trailblazer.”--Los Angeles Times Book Review“She can zing one-liners faster than Zeus can throw lightning bolts.”--Kansas City Star“You know those pundits who bore you to tears trying to balance everyone’s point of view? Coulter isn’t one.”--People“A great deal of research supports Ms. Coulter’s wisecracks.”--New York Times“The conservative movement has found its diva.”--Bill Maher“Ann Coulter is a pundit extraordinaire.”--Rush LimbaughAlso available as a Random House AudioBook and as an e-Book Read Less

Goodreads reviews for How to Talk to a Liberal (If You Must): The World According to Ann Coulter