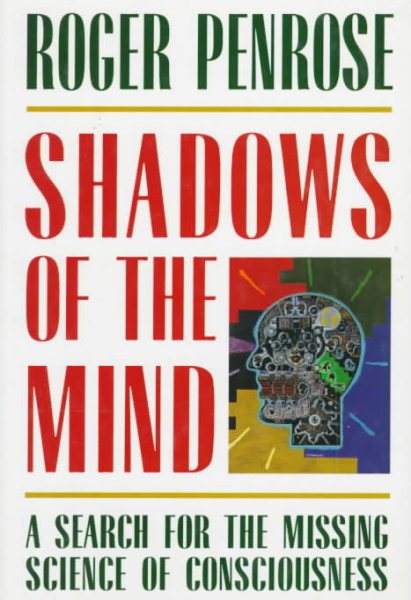 Presenting a look at the human mind's capacity while criticizing artificial intelligence, the author makes suggestions about classical and quantum physics and the role of microtubules Read More
A New York Times bestseller when it appeared in 1989, Roger Penrose'sThe Emperor's New Mind was universally hailed as a marvelous survey of modern physics as well as a brilliant reflection on the human mind, offering a new perspective on the scientific landscape and a visionary glimpse of the possible future of science. Now, in Shadows of the Mind, Penrose offers another exhilarating look at modern science as he mounts an even more powerful attack on artificial intelligence. But perhaps more important, in this volume he points the way to a new science, one that may eventually explain the physical basis of the human mind.Penrose contends that some aspects of the human mind lie beyond computation. This is not a religious argument (that the mind is something other than physical) nor is it based on the brain's vast complexity (the weather is immensely complex, says Penrose, but it is still a computable thing, at least in theory). Instead, he provides powerful arguments to support his conclusion that there is something in the conscious activity of the brain that transcends computation--and will find no explanation in terms of present-day science. To illuminate what he believes this "something" might be, and to suggest where a new physics must proceed so that we may understand it, Penrose cuts a wide swathe through modern science, providing penetrating looks at everything from Turing computability and Godel's incompleteness, via Schrodinger's Cat and the Elitzur-Vaidman bomb-testing problem, to detailed microbiology. Of particular interest is Penrose's extensive examination of quantum mechanics, which introduces some new ideas that differ markedly from those advanced in The Emperor's New Mind, especially concerning the mysterious interface where classical and quantum physics meet. But perhaps the most interesting wrinkle inShadows of the Mind is Penrose's excursion into microbiology, where he examines cytoskeletons and microtubules, minute substructures lying deep within the brain's neurons. (He argues that microtubules--not neurons--may indeed be the basic units of the brain, which, if nothing else, would dramatically increase the brain's computational power.) Furthermore, he contends that in consciousness some kind of global quantum state must take place across large areas of the brain, and that it within microtubules that these collective quantum effects are most likely to reside.For physics to accommodate something that is as foreign to our current physical picture as is the phenomenon of consciousness, we must expect a profound change--one that alters the very underpinnings of our philosophical viewpoint as to the nature of reality.Shadows of the Mind provides an illuminating look at where these profound changes may take place and what our future understanding of the world may be. Read Less

Goodreads reviews for Shadows of the Mind: A Search for the Missing Science of Consciousness

The Road to Reality : A Complete Guide to the Laws of the Un...

The Nature of Space and Time

The Large, the Small and the Human Mind (Canto)