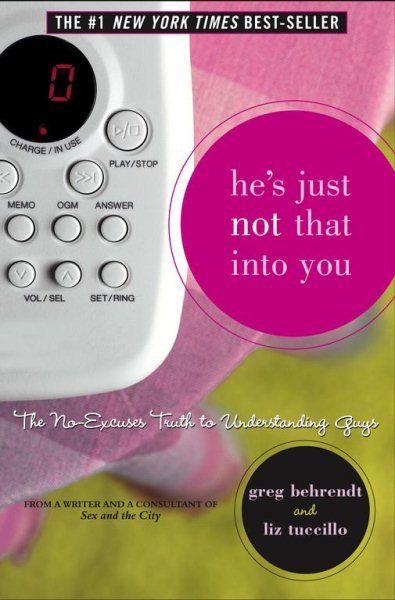 Based on an episode of "Sex and the City," offers a lighthearted, no-nonsense look at dead-end relationships, with advice for letting go and moving on. Read More
He says: Oh sure, they say they're busy. They say that they didn't have even a moment in their insanely busy day to pick up the phone. It was just that crazy. All lies. With the advent of cell phones and speed dialing, it is almost impossible not to call you. Sometimes I call people from my pants pocket when I don't even mean to. If I were into you, you would be the bright spot in my horribly busy day. Which would be a day that I would never be too busy to call you. She says: There is something great about knowing that my only job is to be as happy as I can be about my life, and feel as good as I can about myself, and to lead as full and eventful a life as I can, so that it doesn't ever feel like I'm just waiting around for some guy to ask me out. And most importantly, it's good for us all to remember that we don't need to scheme and plot, or beg anyone to ask us out. We're fantastic. For ages women have come together over coffee, cocktails, or late-night phone chats to analyze the puzzling behavior of men. He's afraid to get hurt again. Maybe he doesn't want to ruin the friendship. Maybe he's intimidated by me. He just got out of a relationship. Greg Behrendt and Liz Tuccillo are here to say that -- despite good intentions -- you're wasting your time. Men are not complicated, although they'd like you to think they are. And there are no mixed messages. The truth may be He's just not that into you. Unfortunately guys are too terrified to ever directly tell a woman, "You're not the one." But their actions absolutely show how they feel. He's Just Not That Into You -- based on a popular episode of Sex and the City -- educates otherwise smart women on how to tell when a guy just doesn't like them enough, so they can stop wasting time making excuses for a dead-end relationship. Reexamining familiar scenarios and classic mindsets that keep us in unsatisfying relationships, Behrendt and Tuccillo's wise and wry understanding of the sexes spares women hours of waiting by the phone, obsessing over the details with sympathetic girlfriends, and hoping his mixed messages really mean "I'm in love with you and want to be with you." He's Just Not That Into You is provocative, hilarious, and, above all, intoxicatingly liberating. It deserves a place on every woman's night table. It knows you're a beautiful, smart, funny woman who deserves better. The next time you feel the need to start "figuring him out," consider the glorious thought that maybe He's just not that into you. And then set yourself loose to go find the one who is. Read Less

Goodreads reviews for He's Just Not That Into You: The No-Excuses Truth to Understanding Guys