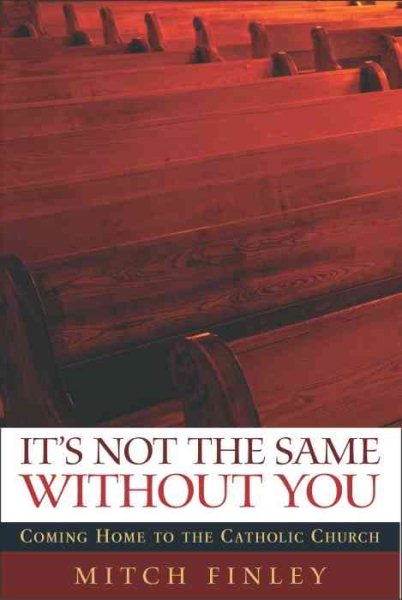 Looks at the reasons many Catholics feel alienated from the church and ways for these lapsed Catholics to renew relations with the church. Read More
In a heartfelt invitation to lapsed or estranged Catholics, Mitch Finley takes a realistic look at the various reasons people feel alienated, and proposes ways to overcome the anger, bitterness, and resentment, so that they may return. Sixty million people in the United States claim a Catholic identity, the largest religious affiliation in the country. The next largest group–approximately nine million–is made up of people who are “fallen away” or “lapsed” Catholics. Mitch Finley addresses this audience, as well as parents struggling with the almost inevitable teenage rebellion against religion, in It’s Not the Same Without You.Finley examines a wide variety of reasons Catholics choose to leave the Church, treating each one in a balanced and fair-minded way. He recounts dozens of true stories about people who have left and returned, a few about those who have yet to return, and candidly acknowledges that many–perhaps most–active Catholics experience periods of estrangement or conflict. Asking forgiveness on behalf of the Church for the ways lapsed Catholics may have been hurt by the institution or its official representatives, he also reminds readers that forgiveness needs to go both ways, and that false humility or arrogant pride all too often stand in the way of admitting to our own errors and failures. Encouraging Catholics to begin a new relationship with their religion, Finley suggests specific ways to become part of the active life of a parish once more. He also discusses the Church’s obligations to those who have left, highlighting successful outreach programs developed by parishes throughout the United States. In guiding readers along the path from alienation to reconciliation, Finley shows that there are many good, objective reasons for “coming home again.” Read Less

Goodreads reviews for It's Not the Same Without You: Coming Home to the Catholic Church