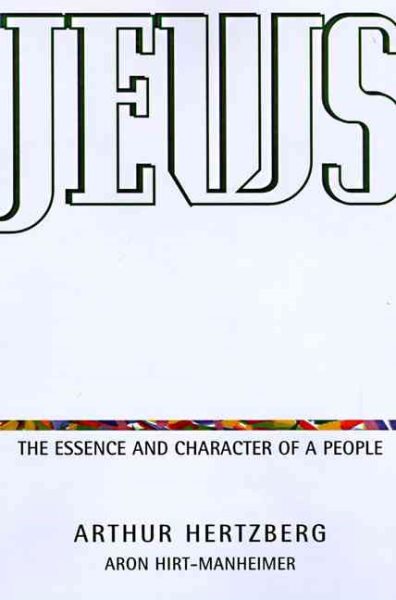 Examines the meaning of Jewish identity throughout history Read More
What makes a Jew a Jew? In the most controversial book on Jewish identity to come along in decades, two influential Jewish leaders dare to answer that provocative question. There is an essential Jewish identity, shaped by the legacy of history and faith, which bridges divergent cultures, politics, and even beliefs. So argues author Rabbi Arthur Hertzberg, the outspoken and influential leader at the forefront of the world Jewish community, who together with Aron Hirt-Manheimer, the distinguished editor of Reform Judaism magazine, presents a myth-shattering view of Jewish character.Jews is a landmark work that provocatively explores the meaning of Jewish identity through the ages. Hertzberg and Hirt-Manheimer present an original and insightful look at the entire Jewish experience and what it means for Jews and non-Jews alike. The authors boldly advance a series of radical arguments: They dare to define the "essential" Jew. They dare to say that the Jewish character has remained the same since the time of Abraham and Sarah. They dare to propose that anti-Semitism is not a Christian invention-it is a reaction to Jews as persistent dissenters in every society. They dare to suggest that the Holocaust was a reenactment of the Crucifixion in which the traditional roles were reversed. They dare to examine the illness of self-hatred that has afflicted Jews from Karl Marx to Woody Allen.This book offers a new and startling perspective on how Jews relate to people of other traditions while also defining the challenge, responsibility, and essence of being a Jew in our time. Jews: The Essence and Character of a People defies the conventional view of Jews that has prevailed for centuries and presents a compelling and realistic portrait of contemporary Jews. This important book is sure to stimulate passionate debate among both Jews and non-Jews. Read Less

Goodreads reviews for Jews: The Essence and Character of a People

The French Enlightenment and the Jews

A Jew in America: My Life and A People's Struggle for Identi...