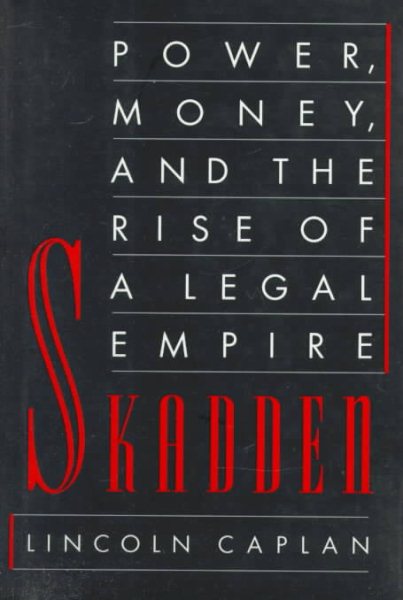 A look at one of the most profitable law firms in the world describes its partners, its rise to power, and its clients, and discusses the profound shift in values illuminated by the firm's success Read More
Skadden, Arps, Slate, Meagher and Flom rode the tidal wave of takeovers in the 1970s and '80s to become the most profitable law firm in the world. At its peak, partners there earned an average of over $1 million a year. Unabashedly competitive and zealously private, Skadden, as the firm is known, was different from leading firms of previous eras: they had reflected the might and luster of their clients, but Skadden became a big business in its own right, with global reach and power. At its center was corporate America's most sought-after legal adviser, the firm's street-smart, media-wise senior partner and presiding genius, Joe Flom, rainmaker par excellence.In this unprecedented look at the culture and history of American lawyering, Lincoln Caplan describes Skadden's origins in the still-white-shoe New York legal universe of the early post-war period and its rise, with the growing sophistication of battles for corporate control, to dazzling preeminence in the era of Michael Milken and Drexel Burnham Lambert - the firm's largest client in the eighties. Skadden takes readers inside a tribe with its own vocabulary and rites of passage, showing us Skadden's view of itself as an aggressive meritocracy - which prizes opportunists and does not consider it a compliment to be called a gentleman and at the same time created a unique $10 million program to support young public-interest lawyers. And, in a penetrating look at the process of making partners, Caplan describes the shifts Skadden has made in response to the changed business climate of the 1990s - as well as the increasingly global practice of law, in which the firm has once again been a groundbreaker. In many ways a history of the development of the legal profession in the post-war period, the story of Joe Flom's firm is about power, money, and a profound shift in values that illuminates an era in American business and society. Read Less

Goodreads reviews for Skadden: Power, Money, and the Rise of a Legal Empire

The Tenth Justice: The Solicitor General and the Rule of Law