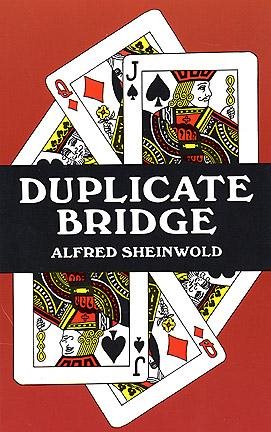 Expert player outlines rules, scoring, and etiquette of duplicate bridge. Taking nothing for granted, he explains everything from the basics to duplicate bridge philosophy, more. Read More
While there are many Rubber Bridge players eager to learn Duplicate, there are many unaware tournament players who use Rubber Bridge tactics in Duplicate games without realizing the two frequently require very different strategy. Mr. Sheinwold, expert and columnist, defines the mechanical and strategical differences for both groups of players.Sheinwold outlines the rules, etiquette, and scoring of Duplicate Bridge. Taking nothing for granted, he explains procedures that might seem elementary to most — the seating arrangements, the shuffle, the deal and play of cards, the accumulation of points, the changes of seats for the next round — yet essential to proper play. He emphasizes that in Duplicate your real opponents are the other East-West or North-South teams, as the case may be, who bid and play the exact same hands as you.After laying the groundwork, Sheinwold continues with clear-cut illustrations to describe the philosophy of Duplicate Bridge — how to make the most of your cards. He reviews standard bidding practice, the Point-Count system popularized by Goren, and important conventions, like Blackwood's and Gerber's; then he analyzes many of the major bidding differences between Duplicate and Rubber Bridge that affect your score. Of course there is a great deal of risky play involved, but Sheinwold carefully explains how to calculate your risk, when to sacrifice bid, when to bid in third and fourth position, and when to pre-empt or close-out.The novice and eager-to-learn player will find this book an indispensable guide, and the more seasoned tournament player will find this an invaluable source of  tips and pointers on bidding and play. For both, Sheinwold makes the tournament play appealing and challenging. It won't be long before his readers score "top on the board" in duplicate competition. Read Less