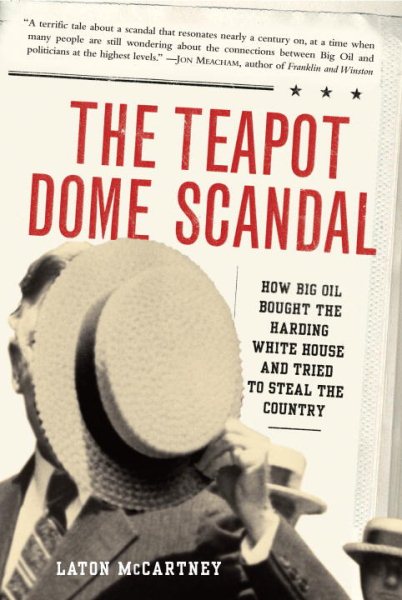 A study of the 1922 Teapot Dome oil scandal discusses the role of the Harding administration in manipulating political power to promote the interests of powerful oil companies and examines the consequences for Harding and his cronies, as well as the lasting legacy of the scandal for American politics. Read More
Mix hundreds of millions of dollars in petroleum reserves; rapacious oil barons and crooked politicians; under-the-table payoffs; murder, suicide, and blackmail; White House cronyism; and the excesses of the Jazz Age. The result: the granddaddy of all American political scandals, Teapot Dome.In The Teapot Dome Scandal, acclaimed author Laton McCartney tells the amazing, complex, and at times ribald story of how Big Oil handpicked Warren G. Harding, an obscure Ohio senator, to serve as our twenty-third president. Harding and his so-called “oil cabinet” made it possible for the oilmen to secure vast oil reserves that had been set aside for use by the U.S. Navy. In exchange, the oilmen paid off senior government officials, bribed newspaper publishers, and covered the GOP campaign debt.When news of the scandal finally emerged, the consequences were disastrous for the nation and for the principles in the plot to bilk the taxpayers: Harding’s administration was hamstrung; Americans’ confidence in their government plummeted; Secretary of the Interior Albert Fall was indicted, convicted, and incarcerated; and others implicated in the affair suffered similarly dire fates. Stonewalling by members of Harding’s circle kept a lid on the story–witnesses developed “faulty” memories or fled the country, and important documents went missing–but contemporary records newly made available to McCartney reveal a shocking, revelatory picture of just how far-reaching the affair was, how high the stakes, and how powerful the conspirators. In giving us a gimlet-eyed but endlessly entertaining portrait of the men and women who made a tempest of Teapot Dome, Laton McCartney again displays his gift for faithfully rendering history with the narrative touch of an accomplished novelist. Read Less

Goodreads reviews for The Teapot Dome Scandal: How Big Oil Bought the Harding White House and Tried to Steal the Country

Friends in High Places: The Bechtel Story : The Most Secret...

Across the Great Divide : Robert Stuart and the Discovery of...