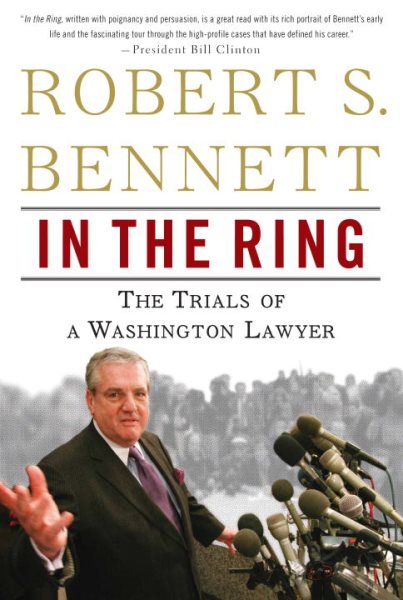 An attorney speaks out on his forty-year career as the legal representative for many of Washington's power elite, going inside some of his most difficult and intriguing cases to reveal how he prepared for trials, handled witnesses, and crafted arguments. Read More
Robert S. Bennett has been a lawyer for more than forty years. In that time, he’s taken on dozens of high-pro?le and groundbreaking cases and emerged as the go-to guy for the nation’s elite. Bob Bennett gained international recognition as one of America’s best lawyers for leading the defense of President Bill Clinton in the Paula Jones case. But long before, and ever since, representing a sitting president, he has fought for justice for many famous (and some now infamous) clients. This is his story.Born in Brooklyn and an amateur boxer in his youth, Bennett has always brought his street ?ghter’s mentality to the courtroom. His case history is a who’s who of ?gures who have dominated legal headlines: super lobbyist Tommy Corcoran, former Secretaries of Defense Clark Clifford and Caspar Weinberger, Marge Schott, and, most recently, New York Times reporter Judith Miller and former World Bank president Paul Wolfowitz. Bennett also served as special counsel to the Senate during the ABSCAM and Keating Five scandals and was a leading member of the National Review Board for the Protection of Children & Young People, created by the United States Conference of Catholic Bishops in response to the sex abuse allegations.Taking the reader deep within his most intriguing and dif?cult cases, In the Ring shows how Bennett has argued for what’s right, won for his clients, and effected his share of change on the system. This is an intimate and compelling memoir of one lawyer’s attempt to ?ght hard and fair. Read Less

Goodreads reviews for In the Ring: The Trials of a Washington Lawyer

All by Myself (Little Critter) (Look-Look)