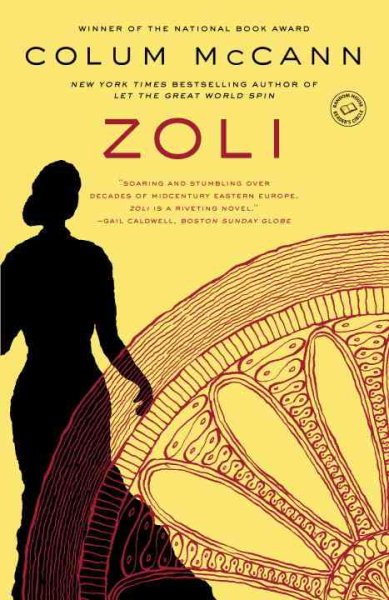 As fascism spreads across 1930s Europe, Zoli Novotna, a young Gypsy poet, and her grandfather seek refuge with a clan of Romani harpists, where her fame as a poet leads to estrangement from her family, exploitation by the ruling Communists, and a flight to the West as she struggles to find where she truly belongs, in a novel loosely based on the life of Romani poet Papsuza. Reprint. 10,000 first printing. Read More
From the National Book Award–winning author of Let the Great World Spin, this haunting novel is an examination of intimacy and betrayal in a community rarely captured so vibrantly in contemporary literature.   NAMED ONE OF THE BEST BOOKS OF THE YEAR BY THE WASHINGTON POST AND THE CHRISTIAN SCIENCE MONITOR  Zoli Novotna, a young woman raised in the traveling Gypsy tradition, is a poet by accident as much as desire. As 1930s fascism spreads over Czechoslovakia, Zoli and her grandfather flee to join a clan of fellow Romani harpists. Sharpened by the world of books, which is often frowned upon in the Romani tradition, Zoli becomes the poster girl for a brave new world. As she shapes the ancient songs to her times, she finds her gift embraced by the Gypsy people and savored by a young English expatriate, Stephen Swann. But Zoli soon finds that when she falls she cannot fall halfway–neither in love nor in politics. While Zoli’s fame and poetic skills deepen, the ruling Communists begin to use her for their own favor. Cast out from her family, Zoli abandons her past to journey to the West, in a novel that spans the 20th century and travels the breadth of Europe.Colum McCann has created a sensuous novel about exile, belonging and survival, based loosely on the true story of the Romani poet Papusza. It spans the twentieth century and travels the breadth of Europe. In the tradition of Steinbeck, Coetzee, and Ondaatje, McCann finds the art inherent in social and political history, while vividly depicting how far one gifted woman must journey to find where she belongs.Praise for Zoli“Very powerful . . . rich in vivid detail . . . the prose is just plain gorgeous. . . . McCann allows us to enter a world few of us know anything about.”—San Francisco Chronicle   “[A] beautifully written [novel] loosely based on the life of the Polish Gypsy poet ‘Papusza,’ who lived throughout most of the twentieth century. . . . Beautifully conceived, wonderfully told, the story is proof of an indomitable spirit. The elusive character of Zoli, the brilliang artist, is unforgettable.”—The Washington Post Book World   “McCann is a writer of large and driving vision. . . . [Zoli] contains passages of stunning lyricism and sharp ironic force.”—The New York Times “Rich and sensuous . . . McCann’s research and lustrous prose bring Zoli vibrantly alive.”—Entertainment Weekly Read Less

Goodreads reviews for Zoli: A Novel

Thirteen Ways of Looking: A Novella and Three Stories