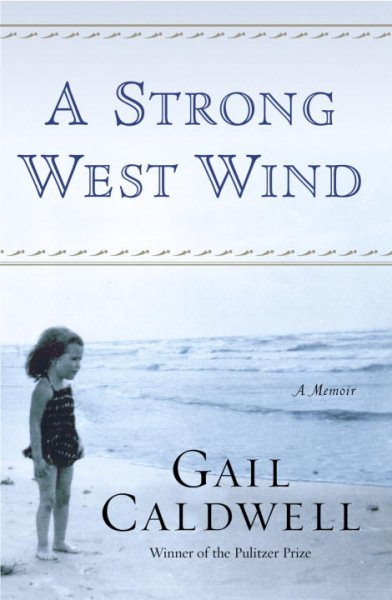 A memoir by the Pulitzer Prize-winning critic for The Boston Globe offers an evocative portrait of growing up in the Texas Panhandle during the 1950s and the rebellious 1960s, describing her introspective childhood, voracious love of reading, the anguish of the Vietnam War, turbulent romance, and rebellion against her beloved father. 50,000 first printing. Read More
In this exquisitely rendered memoir set on the high plains of Texas, Pulitzer Prize winner Gail Caldwell transforms into art what it is like to come of age in a particular time and place. A Strong West Wind begins in the 1950s in the wilds of the Texas Panhandle–a place of both boredom and beauty, its flat horizons broken only by oil derricks, grain elevators, and church steeples. Its story belongs to a girl who grew up surrounded by dust storms and cattle ranches and summer lightning, who took refuge from the vastness of the land and the ever-present wind by retreating into books. What she found there, from renegade women to men who lit out for the territory, turned out to offer a blueprint for her own future. Caldwell would grow up to become a writer, but first she would have to fall in love with a man who was every mother’s nightmare, live through the anguish and fire of the Vietnam years, and defy the father she adored, who had served as a master sergeant in the Second World War. A Strong West Wind is a memoir of culture and history–of fathers and daughters, of two world wars and the passionate rebellions of the sixties. But it is also about the mythology of place and the evolution of a sensibility: about how literature can shape and even anticipate a life.Caldwell possesses the extraordinary ability to illuminate the desires, stories, and lives of ordinary people. Written with humanity, urgency, and beautiful restraint, A Strong West Wind is a magical and unforgettable book, destined to become an American classic. Read Less

Goodreads reviews for A Strong West Wind: A Memoir