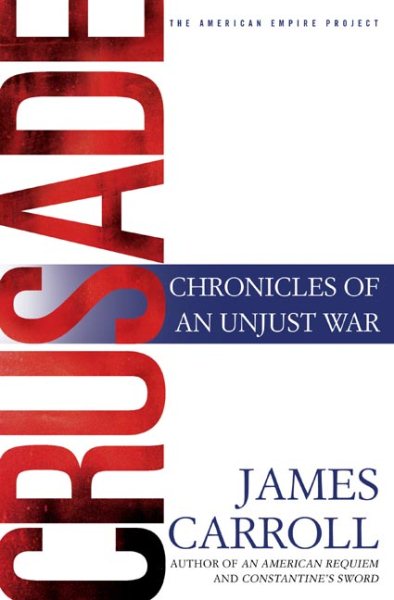 An indictment of the Bush administration's war policies argues that war was an inappropriate response to the activities of Osama bin Laden, states that the president exploited the nation's fears, and predicts a failure in the war in Iraq. Read More
A devastating indictment of the Bush administration's war policies from the bestselling author and respected moral authority With the words "this Crusade, this war on terror," George W. Bush defined the purpose of his presidency. And just as promptly, James Carroll-Boston Globe columnist, son of a general, former antiwar chaplain and activist, and recognized voice of ethical authority-began a week-by-week argument with the administration over its actions. In powerful, passionate bulletins, Carroll dissected the President's exploitation of the nation's fears, invocations of a Christian mission, and efforts to overturn America's traditional relations-with other nations and its own citizens. Crusade, the collection of Carroll's searing columns, offers a comprehensive and tough-minded critique of the war on terror. From Carroll's first rejection of "war" as the proper response to Osama bin Laden, to his prescient verdict of failure in Iraq, to his never-before-published analysis of the faith-based roots of current U.S. policies, this volume displays his rare insight and scope. Combining clear moral consciousness, an acute sense of history, and a real-world grasp of the unforgiving demands of politics, Crusade is a compelling call for the rescue of America's noblest traditions.A cry from the heart, a record of protest, and a permanently relevant analysis, Carroll's work confronts the Bush era and measures it against what America was meant to be. Read Less

Goodreads reviews for Crusade: Chronicles of an Unjust War

Constantine's Sword: The Church and the Jews, A History

Constantine's Sword: The Church and the Jews