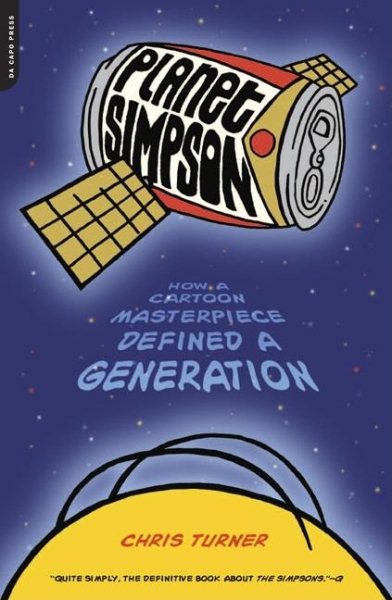 As Comic Book Guy might say, this thorough examination of a pop culture phenomenon is 'Best. Simpson. Book. Ever.'-January magazine Read More
D'oh-it's "The Simpsons." And here's the book with the behind-the-scenes story of how America's favorite nuclear family first arrived at a TV near you, how the series grew into a worldwide icon, and who brings it to life so brilliantly week after week, year after year. Since first airing in 1987 as a cartoon interlude on the short-lived "Tracey Ullman Show," "The Simpsons" has deliciously skewered the foibles of American life, evolving into a cultural institution that reaches across the generations. As satire, it's sharp and funny. As a pop phenom, it's in a league of its own. And with Planet Simpson, it finally gets the sprawling, multidimensional critical look it so richly deserves. "Smart and funny, Turner writes with fitting enthusiasm for his subject while working in seemly references to cultural theory and TV-insider politics. His book is just the thing for fellow fans, and for anyone interested in how pop phenomena came to be." -Hollywood Reporter This book was not prepared, licensed, approved, or endorsed by any entity involved in creating or producing the television series "The Simpsons." Read Less

Goodreads reviews for Planet Simpson: How a Cartoon Masterpiece Defined a Generation

Fire Alarm: Reading Walter Benjamin's "On the Concept of His...

All Hat and No Cattle: Tales of a Corporate Outlaw Shaking u...