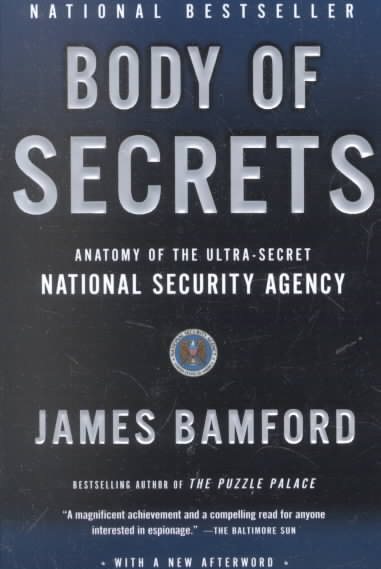 A sober, hard-hitting examination of the National Security Agency takes readers inside this secretive body to reveal its operations and dirtiest secrets from the Cold War. Reprint. 100,000 first printing. Read More
The NSA is the largest, most secretive, and most powerful intelligence agency in the world. With a staff of thirty-eight thousand people, it dwarfs the CIA in budget, manpower, and influence. Recent headlines have linked it to economic espionage throughout Europe and to the ongoing hunt for the terrorist leader Osama bin Laden.James Bamford first penetrated the wall of silence surrounding the NSA in 1982, with the much-talked-about bestseller The Puzzle Palace. In Body of Secrets, he offers shocking new details about the inner workings of the agency, gathered through unique access to thousands of internal documents and interviews with current and former officials. Unveiling extremely sensitive information for the first time, Bamford exposes the role the NSA played in numerous Soviet bloc Cold War conflicts and discusses its undercover involvement in the Vietnam War. His investigation into the NSA's technological advances during the last fifteen years brings to light a network of global surveillance ranging from on-line listening posts to sophisticated intelligence-gathering satellites. In a hard-hitting conclusion, he warns that the NSA is a two-edged sword. While its worldwide eavesdropping activities offer the potential for tracking down terrorists and uncovering nuclear weapons deals, it also has the capability to listen in on global personal communications. Read Less

Goodreads reviews for Body of Secrets: Anatomy of the Ultra-Secret National Security Agency

The Puzzle Palace: Inside the National Security Agency, Amer...