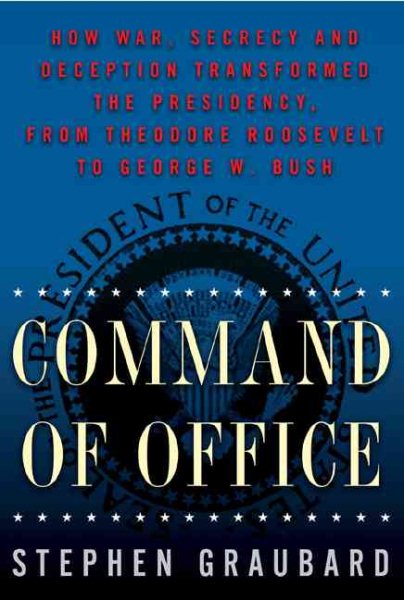 A history of the remarkable shift of power to the American presidency, told through incisive analyses of the eighteen men who have held the office in the last century Read More
The modern presidency really begins on September 14, 1901, argues Stephen Graubard, with the assassination of William McKinley and the succession of Teddy Roosevelt. TR's vigorous presidency foretold the expansion of wartime authority under Wilson; the growth of federal government under FDR; and the national security issues that dominated much of the foreign policy concerns during the Cold War.In his provocative new account of the enormous shift of power to the office of the American presidency, Graubard draws upon his intimate knowledge of every president since FDR to reveal the dangerous transformation of the executive branch in the last hundred years. Graubard sees three different "presidencies" over the course of the century, marked by increasing accumulation of authority: the presidency created by TR, Wilson, and FDR, continued under Truman and Eisenhower, in which foreign policy issues played a far greater role in presidential politics; the period of America's time of troubles from Kennedy to Carter, in which the disastrous Vietnam War spurred a further tendency to secrecy; and the third presidency, defined by Reagan and marked by spin. Learning the lessons of Reagan and Clinton, George W. Bush has inherited a far more powerful office than the one originally envisioned by the Founding Fathers. With access to former members of both Republican and Democratic administrations, Graubard has written a masterful history of presidential power--one that anyone concerned with American politics will need to read. Read Less

Goodreads reviews for Command Of Office: How War, Secrecy and Deception Transformed the Presidency, from Theodore Roosevelt to George W. Bush

Command of Office: How War, Secrecy, and Deception Transform...

Shalom Peace: The Sacrement of Reconcilication

Aladdin , or the Wonderful Lamp and Other Stories

By No Author / editor Stated