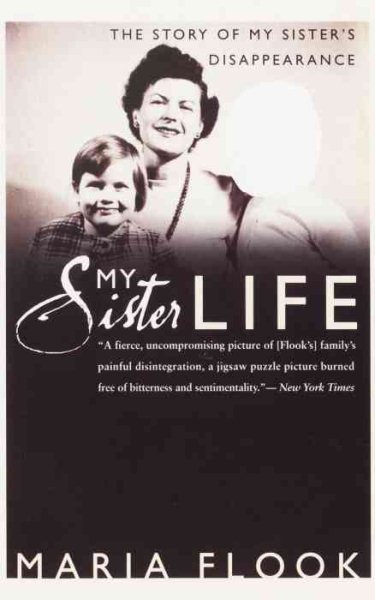 A Pushcart Prize-winning novelist tells how the bond she formed with her older sister, a runaway, helped them survive their volatile mother and their experiences with sexual assault, single motherhood, and mental illness. Reprint. Read More
When Maria Flook's fourteen-year-old sister Karen disappeared from their suburban home, the author was changed forever.My Sister Life maps the story of two castaways from American suburbia who, while apart from each other, live mysteriously parallel lives.With unrelenting realism and beguiling wit, Flook gives us an intimate account of her sister's life as a child prostitute, and of their coming of age in the 1960s--that surreal and wrenching moment of baby-boomer disenfranchisement, when the sexual revolution collided with the domestic fallout from the Vietnam War. From the ocean liners and Paris vacations of their refined upbringing to the gritty peepshows and adult theaters where they find jobs, the girls flee from a beautiful and tormented matriarch with secrets of her own.Her missing sister becomes Flook's secret heroine--the sole example to follow in her journey into womanhood. The sisters live in trailer parks. They are faced with sexual assault, car thefts, and petty crimes with unpredictable men. Escaping from an abusive Vietnam vet, Karen takes her toddler to join her sister, who is herself raising a baby on her own; it is the first time they are under the same roof since their childhood. Their unorthodox reunion allows the sisters to forge a life-saving bond.My Sister Life moves beyond biography or memoir to give us an astonishing vision of an American family--an authentic testimony to the defiant, undaunted faith between two sisters who connect after years apart.From the Hardcover edition. Read Less

Goodreads reviews for My Sister Life: The Story of My Sister's Disappearance