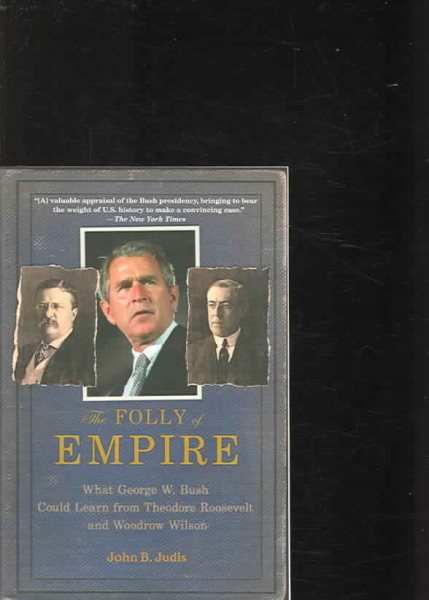 A century ago, the Theodore Roosevelt administration believed building an American empire was the on... Read More
A century ago, the Theodore Roosevelt administration believed building an American empire was the only way the U.S. could ensure its role in the world, but came to see the occupation of the Philippines as America's "heel of Achilles." Woodrow Wilson, shocked by the failure of American intervention in Mexico and by the outbreak of World War I, came to see imperialism as the underlying cause of war and set about trying to create an international system to eliminate empires. But, the current Bush administration, despite the lessons of the past, has revived the older dreams of American empire--under the guise of democracy--even touting the American experience in the Philippines as a success upon which the United States could build in attempting to transform the Middle East.With The Folly of Empire, John B. Judis shows that history can teach us lessons and allow political leaders, if sensitive to history, to change their strategy in order to avoid past mistakes. Judis shows how presidents from Franklin Roosevelt to Bill Clinton drew upon what Theodore Roosevelt and Woodrow Wilson learned about the pitfalls of using American power unilaterally to carve out a world in America's image. Exercising leadership through international institutions and alliances, the United States was able to win the Cold War and the first Gulf War. But by ignoring these lessons, the Bush administration has created a quagmire of terror and ethnic conflict.By examining America's role in the international community--then and now--The Folly of Empire is a sharp and compelling critique of America's current foreign policy and offers a direct challenge to neo-conservatives. Read Less

Goodreads reviews for The Folly of Empire: What George W. Bush Could Learn from Theodore Roosevelt and Woodrow Wilson

The Populist Explosion: How the Great Recession Transformed...