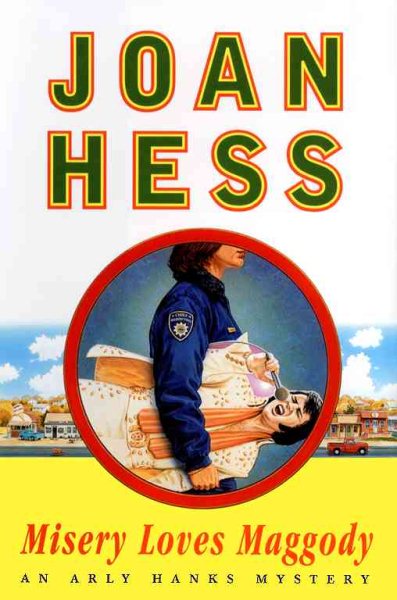 Maggody police chief Arly Hanks investigates the death of a local resident who fell from an eighth-floor hotel balcony while on an Elvis Presley Pilgrimage to Memphis Read More
Misery Loves Maggody And you will too. Murder and mayhem have never been so hilarious as in the sleepy little town of Maggody, Arkansas. Population 755. And in this newest entry to the Joan Hess series, there's twice the fun when some of Maggody's most beloved inhabitants venture out of state. Meanwhile, all manner of unrest also unfolds on the familiar Maggody home front. When beleaguered chief of police Arly Hanks hears that her mother, Ruby Bee, and best friend, Estelle Oppers, are headed for Memphis on a four-day Elvis Pilgrimage, she thinks she may be getting a break that is long overdue. But before the "pilgrims" are past the airport on the way out of Faberville, the fur starts flying, and soon the trip is completely stalled by a variety of deadly doings. Estelle calls home to report that Ruby Bee has collapsed and is in the local hospital, and even before Arly's seen the delta dawn, one of the other clients on the tour is found dead beneath the eighth-floor balcony of the hotel. Worse still, the balcony from which she plunged turns out to be none other than the room of a prominent Maggody citizen, who has been hauled off to the local jail. What's more, Estelle's pretty darn sure the tour van is being followed by thugs in an ominous black car -- and another body's about to be laid to rest in Graceland. Back home things aren't much better and certainly no quieter, so Arly Hanks will have to be at her most resourceful to restore the peace once again to the inhabitants of Maggody -- both those at home and those who have roamed beyond the town limits. Variously described by critics as a "rollicking tour de force" (Boston Magazine), "Bawdy entertainment" (Kirkus Reviews), "Hilarious" (St. Louis Post-Dispatch), "delectable and continually surprising" (The New York Times Book Review), Joan Hess's Maggody series is one of a kind and just keeps getting better. Read Less

The Painted Queen: An Amelia Peabody Novel of Suspense (Amel...

Murder as a Second Language: A Claire Malloy Mystery (Claire...