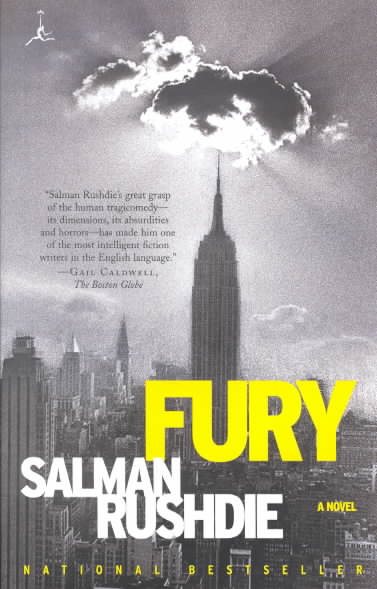 Malik Solanka, a middle-aged ex-philosophy professor and millionaire creator of a hugely popular doll, seeks refuge from his unwanted fame and disintegrating marriage in New York City. Read More
A NEW YORK TIMES NOTABLE BOOK“Salman Rushdie’s great grasp of the human tragicomedy–its dimensions, its absurdities and horrors–has made him one of the most intelligent fiction writers in the English language.”–Gail Caldwell, The Boston Globe“Fury is a profoundly, ecstatically affirmative work of fiction. It reaffirms Rushdie’s standing . . . at the very front rank of contemporary literary novelists.”–Baltimore SunMalik Solanka, historian of ideas and world-famous dollmaker, steps out of his life one day, abandons his family in London without a word of explanation, and flees for New York. There’s a fury within him, and he fears he has become dangerous to those he loves. He arrives in New York at a time of unprecedented plenty, in the highest hour of America’s wealth and power, seeking to “erase” himself. But fury is all around him. An astonishing work of explosive energy, Fury is by turns a pitiless and pitch-black comedy, a love story of mesmerizing force, and a disturbing inquiry into the darkest side of human nature.“Rushdie’s ideas–about society, about culture, about politics–are embedded in his stories and in the interlocking momentum with which he tells them. . . . All of Rushdie’s synthesizing energy, the way he brings together ancient myth and old story, contemporary incident and archetypal emotion, transfigures reason into a waking dream.”–Los Angeles Times Book Review“Well, here it is, then, his first 3-D, full-volume American novel, finger-snapping, wildly stupefying, often slyly funny, red-blooded and red-toothed. [Fury] twinkles brightly in tragicomic passages.”–The Miami HeraldCover design:Cover illustration: Read Less