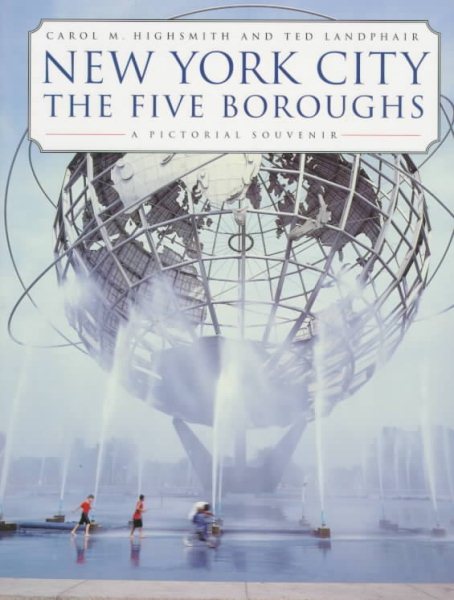 Updated, fresh, and affordably priced, this souvenir-sized visual documentary of New York City contains remarkable images that capture the excitement, landmarks, and people of the Five Burroughs. Read More
New York City is known for its towering skyscrapers, world-class theaters and museums, honking taxis, and bustling crowds. But it is so much more. It is a smoky jazz club in Harlem, an All Saints Day feast in Queens, an extra-innings baseball game in the Bronx, a thrill-seeker's dream in Brooklyn's Coney Island. Ever since the isle of Manhattan expanded its domain back in the 1890's this megalopolis of five boroughs has encompassed a surprising mélange of neighborhoods, cultures, styles, and outlooks.In a stunning celebration of New York and its boroughs, renowned photographer Carol M. Highsmith captures the diversity of this sprawling city in spectacular full-color images. This pictorial souvenir presents the best of New York and its environs, including architectural landmarks like Manhattan's St. Patrick's Cathedral and the Chrysler Building, elegant Park Avenue and the frenetic New York Stock Exchange; ethnic, eclectic, and fashionable neighborhoods throughout all five boroughs; wonderful parklands and botanical gardens; Yankee Stadium and the Bronx Zoo in the Bronx; the Socrates Sculpture Park and the New York Hall of Science in Queens; the stately Brooklyn Museum and Staten Island's serene Snug Harbor.A lively and fact-filled foreword and captions by award-winning writer Ted Landphair help paint the full picture of the undisputed capital of fashion, finance, publishing, performing arts, and more. New York City: The Five Boroughs, A Pictorial Souvenir is a wonderful keepsake of a memorable visit, and the ideal gift for anyone who savors the unforgettable architecture, unsurpassed cultural offerings, and sensational parklands of an eclectic metropolis that is arguably the most fascinating city in the world. Read Less