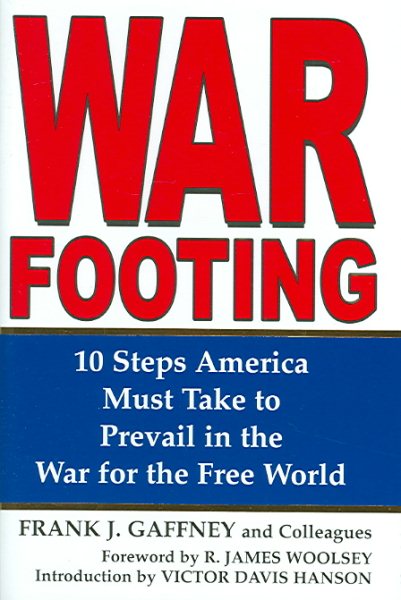 Gaffney, founder of the Center for Security Policy, offers ten specific steps that American individuals and communities can take to ensure their way of life and safety, now and in the future, in the war against Muslim extremists. He gives suggestions for securing the country's borders, preparing for an electromagnetic pulse attack that could wreak havoc on electrical and electromagnetic systems, wielding America's economic and financial weapons, and marginalizing the UN. Annotation ©2006 Book News, Inc., Portland, OR (booknews.com) Read More
America has been at war for years, but until now, it's not been clear with whom. We have been fighting without being clear for what. We have been waging war without using the full resources we need to win. With the publication of War Footing, Frank Gaffney and his colleagues make it clear not only whom the enemy is and how high the stakes are, but also how we can prevail. Their book explains that we are engaged in nothing less than a War for the Free World - a fight to the death with Islamofascists who adhere to a political ideology bent on our destruction. It then offers ten specific steps that Americans, as individuals and as communities, can take to ensure our way of life and the safety and well-being of our children. These steps include specific recommendations about how to know the enemy, support our troops, provide for our energy security, stop investing in terror, equip the country for war at home, counter an EMP attack, secure our borders and interior against illegal immigration, wage political warfare, launch regional initiatives, and wield effective diplomacy. This definitive, highly readable "owner's manual" for the War for the Free World has been written by one of the most prominent national security experts of our time, Frank J. Gaffney, and his extraordinary team of respected experts. Among them are R. James Woolsey, Victor Davis Hanson, Generals Tom McInerney, USAF (Ret.) and Paul Vallely, USA (Ret.); Alex Alexiev, Andrew McCarthy, Claudia Rosett, Michael Rubin, Daniel Goure, Caroline Glick, Michael Waller, and many others. Read Less

Goodreads reviews for War Footing: 10 Steps America Must Take to Prevail in the War for the Free World

The Story of Doctor Dolittle