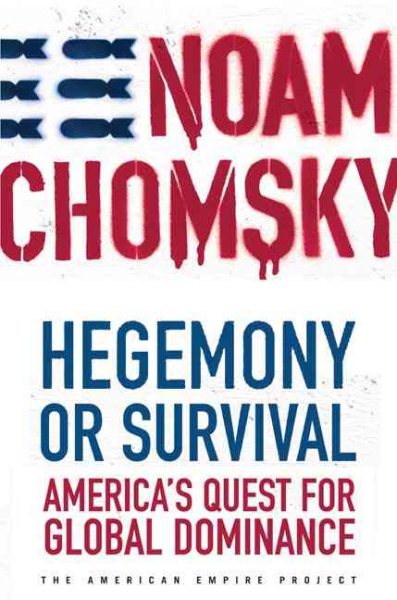 An analysis of America's pursuit of domination predicts negative consequences if the Bush administration is enabled to pursue a goal of global supremacy. Read More
From the world's foremost intellectual activist, an irrefutable analysis of America's pursuit of total domination and the catastrophic consequences that are sure to followThe United States is in the process of staking out not just the globe but the last unarmed spot in our neighborhood-the heavens-as a militarized sphere of influence. Our earth and its skies are, for the Bush administration, the final frontiers of imperial control. In Hegemony or Survival , Noam Chomsky investigates how we came to this moment, what kind of peril we find ourselves in, and why our rulers are willing to jeopardize the future of our species.With the striking logic that is his trademark, Chomsky dissects America's quest for global supremacy, tracking the U.S. government's aggressive pursuit of policies intended to achieve "full spectrum dominance" at any cost. He lays out vividly how the various strands of policy-the militarization of space, the ballistic-missile defense program, unilateralism, the dismantling of international agreements, and the response to the Iraqi crisis-cohere in a drive for hegemony that ultimately threatens our survival. In our era, he argues, empire is a recipe for an earthly wasteland.Lucid, rigorous, and thoroughly documented, Hegemony or Survival promises to be Chomsky's most urgent and sweeping work in years, certain to spark widespread debate. Read Less

For reasons of state