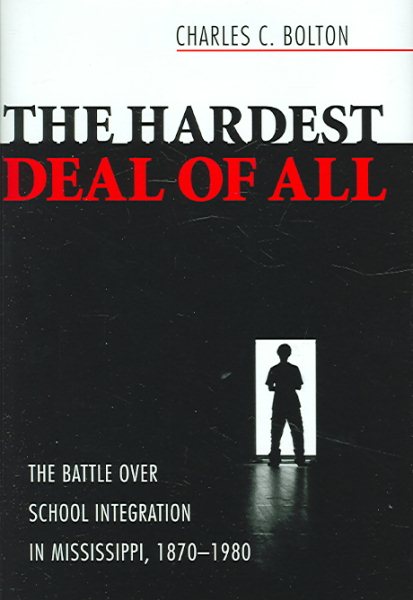 Race has shaped public education in the Magnolia State, from Reconstruction through the Carter Admin... Read More
Race has shaped public education in the Magnolia State, from Reconstruction through the Carter Administration. ForThe Hardest Deal of All: The Battle Over School Integration in Mississippi, 1870-1980 Charles C. Bolton mines newspaper accounts, interviews, journals, archival records, legal and financial documents, and other sources to uncover the complex story of one of Mississippi's most significant and vexing issues. This history closely examines specific events--the after-math of the Brown v. Board of Education decision, the 1966 protests and counter-demonstrations in Grenada, and the efforts of particular organizations--and carefully considers the broader picture.Despite a "separate but equal" doctrine established in the late nineteenth century, the state's racially divided school systems quickly developed vast differences in terms of financing, academic resources, teacher salaries, and quality of education. As one of the nation's poorest states, Mississippi could not afford to finance one school system adequately, much less two. For much of the twentieth century, whites fought hard to preserve the dual school system, in which the maintenance of one-race schools became the most important measure of educational quality. Blacks fought equally hard to end segregated schooling, realizing that their schools would remain underfunded and understaffed as long as they were not integrated.Charles C. Bolton is professor and chair of history and co-director of the Center for Oral History and Cultural Heritage at the University of Southern Mississippi in Hattiesburg. He is the coauthor ofMississippi: An Illustrated History and coeditor of The Confessions of Edward Isham: A Poor White Life of the Old South. Bolton's work has also appeared in theJournal of Southern History, Journal of Mississippi History, and Mississippi Folklife. Read Less

Goodreads reviews for The Hardest Deal of All: The Battle over School Integration in Mississippi, 1870-1980