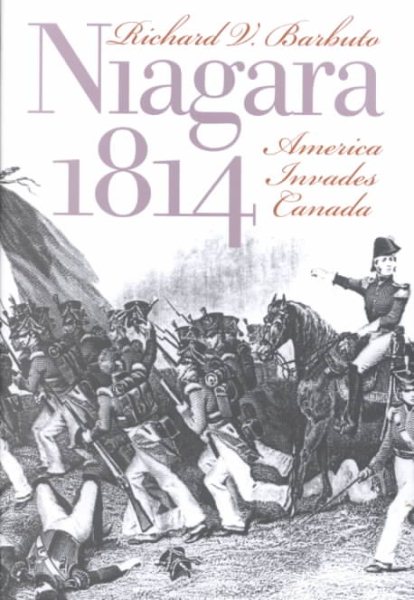 This book is the first published comprehensive study of the Niagara Campaign of 1814, the United State's failed attempt to wrest Canada from the United Kingdom. As he paints the picture of this piece of the war of 1812, Barbuto suggests that the United States could have been victorious (he offers the examples of US victories in Chippewa), were it not for the poor leadership and confused strategy of President James Madison and Secretary of War John Armstrong. Hard history is intermixed with vivid battle stories, maps and painted portraits. Annotation c. Book News, Inc., Portland, OR (booknews.com) Read More
Most books on the War of 1812 focus on the burning of Washington, D.C., the Battles of Baltimore and New Orleans, and the war in the Old Northwest. Scant attention, however, has been paid the Niagara Campaign of 1814-the American army's ambitious but failed attempt to wrest Canada from British control. While a few writers have dealt with aspects of this effort, Richard Barbuto is the first to offer a comprehensive study of the entire campaign.Barbuto covers every aspect of a campaign that saw the American army come of age, even as its military leaders blundered away potential victory and the acquisition of a coveted expanse of North American territory. Vividly recreating the major battles on the Niagara peninsula—at Chippawa, Lundy's Lane, Fort Erie, and Cook's Mill—Barbuto also clarifies the role of these engagements within the overall framework of American strategy.Despite early success at Chippawa, four long months of fighting finally ended in something like a draw, with the British still in control of Canada. Barbuto argues convincingly that the American government was never really able to harness, coordinate, and focus its tremendous resources in ways that would have allowed the campaign to succeed. Much of the blame, he shows, can be attributed to the poor leadership and confused strategic thinking of President James Madison and his secretary of war, John Armstrong.The American effort was further undermined by manpower shortages, a few ineffective field commanders, and the army and navy's inability to coordinate their objectives and operations. Even so, Barbuto contends that the American soldier, led by the likes of Jacob Brown and the legendary Winfield Scott, performed surprisingly well against one of the great armies of the nineteenth century.Barbuto's analysis, unmarred by national bias, presents a balanced picture of these events from the perspective of all participants—American, British, Canadian, and Native American. He also fills an important gap by providing the first ever capsule histories of all regimental-sized units involved in the campaign. Breathing new life into these events, his far-ranging study should become the definitive work on this long-neglected campaign. Read Less

By Museums at Stony Brook