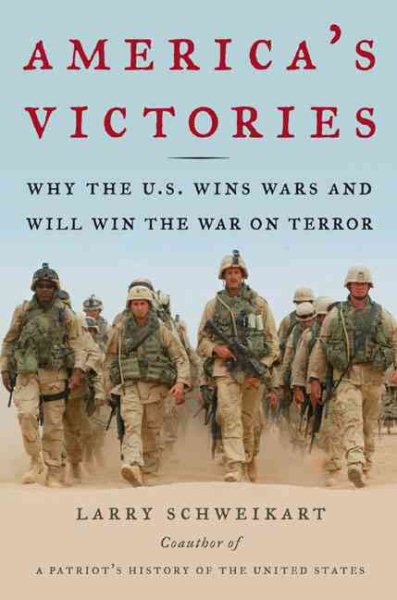 Argues that America wins wars because of its commitment to freedom, its respect for life, and the autonomy of its soldiers, and analyzes key battles in America's military history. Read More
From the Revolutionary War to the present, the American military has consistently beaten the odds. It’s not luck. America’s armed services are under attack. From college campuses to the floor of the Senate, the Iraq war is portrayed as a quagmire, the army is described as "broken," and our men and women in uniform are maligned as torturers. By seeing everything through the distorted lens of Vietnam?a war shrouded in harmful myths? critics have lost sight of our country’s real military record, and the factors that have enabled us to win with remarkable consistency, in situations even more dire than Iraq. In America’s Victories, Professor Larry Schweikart restores the truth about our amazing military heritage. Just as he did in his acclaimed previous book, A Patriot’s History of the United States, Professor Schweikart cuts through the distortions passed along by academia and the media. Far from being a cruel, bloodthirsty nation, eager to acquire other people’s resources, American troops value the sanctity of life more than any military culture in history. This fundamental trait has led, over the last two centuries, to more humane treatment of prisoners, more daring POW rescues, and more effective operations than any comparable power. America’s Victories explains how this culture of victory has endured through the darkest moments of World War II, the Korean and Vietnam wars, and how it has helped our troops prove their critics wrong over and over, from the Battle of New Orleans under Andrew Jackson to the war in Afghanistan under Tommy Franks. Read Less

Goodreads reviews for America's Victories: Why the U.S. Wins Wars and Will Win the War on Terror

A Patriot's History® of the United States: From Columbus's G...