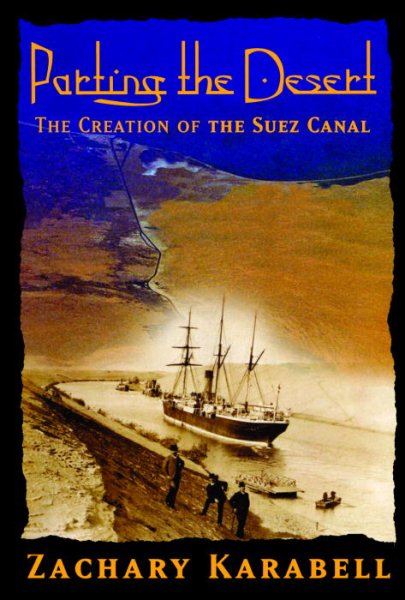 Tells the story of the creation of the Suez Canal--heralded as a symbol of progress that would unite nations--and the part played by its driving force, French diplomat and engineer Ferdinand de Lesseps. Read More
The building of the Suez Canal was considered the greatest engineering feat of the nineteenth century, but, as Zachary Karabell shows, it was much more than a marvel of construction. It was a moment when the dreams and hopes of two cultures, several states, and thousands of ordinary people converged to change the face of the earth.Parting the Desert describes an extraordinary meeting between East and West. The Egyptians hoped the canal would lead to a national renaissance and renewed power in the eastern Mediterranean. The French expected the canal to enhance world trade and advance Western civilization. Napoleon Bonaparte first raised the possibility of building a waterway during his occupation of Egypt in the late eighteenth century. The idea was kept alive by the utopian followers of Saint-Simon and was then taken up by Ferdinand de Lesseps, the energetic, ambitious French diplomat who masterminded the project. As Karabell points out, Lesseps was often in the right place at the right time, and he had the good luck of forging a friendship with the young Egyptian prince Muhammad Said. In 1854, Said became the ruler of Egypt and granted Lesseps the concession to cut a hundred-mile-long canal across the isthmus of Suez. It would take fifteen years of ceaseless effort before that dream became reality.A brilliant entrepreneur, Lesseps traveled throughout Europe and the Near East to raise support and money. He convinced thousands of ordinary French citizens to invest in the canal company, and though he never won over the British prime minister, Lord Palmerston, he did convince British merchants and businessmen that the canal would benefit them. During years of careful diplomacy, Lesseps neutralized the Ottoman sultan, and with the help of his cousin the Empress Eugénie, he won the backing of the emperor of France, Napoleon III. By the time the canal was completed, it had become a symbol of progress and a sign that East and West could coexist and cooperate, and Lesseps was lionized throughout Europe as a hero of the industrial age. But it was not smooth sailing all the way: the company relied heavily on forced labor, diplomatic intrigues continued to the very end, and technical and financial obstacles constantly threatened the project’s completion. The creation of the Suez Canal captured the imagination of the world. It was heralded as a symbol of progress that would unite nations, but its legacy is mixed. It was supposed to strengthen the Middle East and bridge cultures; instead the gap widened, and the region remains a flash point for conflict. Parting the Desert is both a transporting narrative and a meditation on the origins of the modern Middle East. Read Less

Goodreads reviews for Parting the Desert: The Creation of the Suez Canal

Superfusion: How China and America Became One Economy and Wh...

Peace Be Upon You: Fourteen Centuries of Muslim, Christian,...

The Last Campaign: How Harry Truman Won the 1948 Election