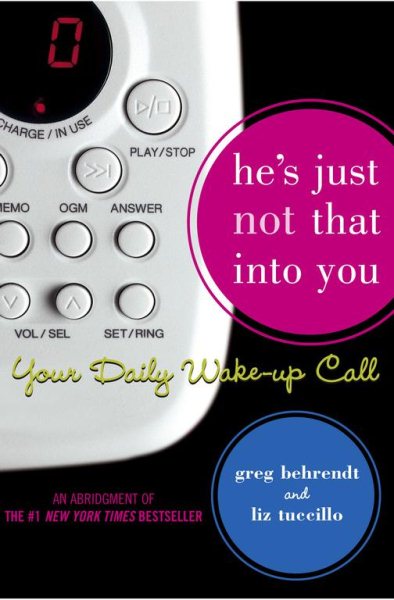 Based on an episode of "Sex and the City," offers a lighthearted, no-nonsense look at dead-end relationships, with advice for letting go and moving on, in an abridged version of the best-selling relationship handbook. Read More
Everyone can use a daily wake-up call. Now in bite-size mantras, the abridged empathetic wit and wisdom of the number one New York Times bestseller He's Just Not That Into You will recharge and inspire your dating outlook one wake-up call at a time. For ages women have come together over coffee, cocktails, or late-night phone chats to analyze the puzzling behavior of men. Greg Behrendt and Liz Tuccillo are here to say that -- despite good intentions -- you're wasting your time. Men are not complicated, although they'd like you to think they are. And there are no mixed messages. The truth may be, He's just not that into you. He's Just Not That Into You -- based on a popular episode of Sex and the City -- educates otherwise smart women on how to tell when a guy just doesn't like them enough, so they can stop wasting time making excuses for a dead-end relationship. This book knows you're a beautiful, smart, funny woman who deserves better Read Less

Goodreads reviews for He's Just Not That Into You: Your Daily Wake-Up Call