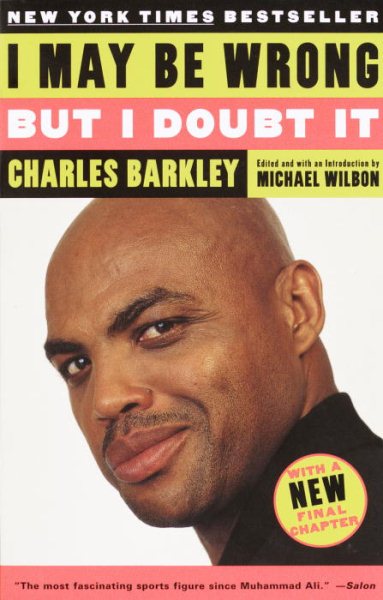 The outspoken former NBA player and sports commentator shares his words of wisdom about, opinions on, and witty observations of basketball, popular culture, personal relationships, celebrity and fame, politics, money, and life. Reprint. 100,000 first printing. Read More
Charles Barkley has never been shy about expressing his opinions. Michael Jordan once said that we all want to say the things that Barkley says, but we don’t dare. But even die-hard followers of the all-time NBA great, the star of TNT’s Inside the NBA and CNN’s TalkBack Live, will be astonished by just how candid and provocative he is in this book—and just how big his ambitions are. Though he addresses weighty issues with a light touch and prefers to stir people to think by making them laugh, there’s nothing Charles Barkley shies away from here—not race, not class, not big money, not scandal, not politics, not personalities, nothing. “Early on,” says Washington Post columnist and ESPN talk show host Michael Wilbon in his Introduction, “Barkley made his peace with mixing it up, and decided the consequences were very much worth it to him. And that makes him as radically different in these modern celebrity times as a 6-foot-4-inch power forward.”If there’s one thing Charles Barkley knows, it’s the crying need for honest, open discussion in this country—the more uncomfortable the subject, the more necessary the dialogue. And if the discussion leader can be as wise, irreverent, (occasionally) profane and (consistently) funny as Charles Barkley, so much the better. Many people are going to be shocked and scandalized by I May Be Wrong but I Doubt It, but many more will stand up and cheer. Like Molly Ivins or Bill O’Reilly, Charles Barkley is utterly his own thinker, and everything he says comes from deep reflection. One way or another, if more blood hasn’t reached your brain by the time you’ve finished this book, maybe you’ve been embalmed. Read Less

Goodreads reviews for I May Be Wrong but I Doubt It

I May Be Wrong but I Doubt It

Outrageous!: The Fine Life and Flagrant Good Times of Basket...