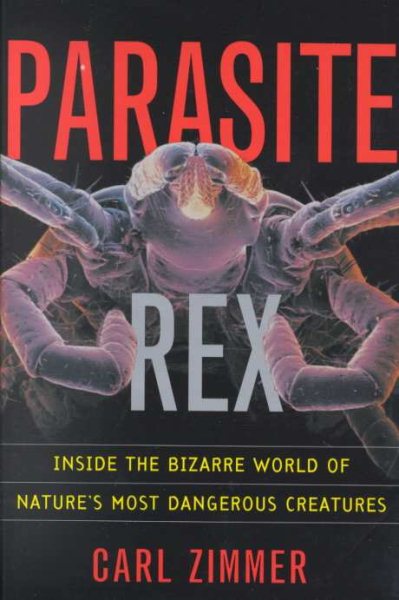 A look inside the often hidden world of parasites turns the clock back to the beginning of life on Earth to answer key questions about these highly evolved and resilient life forms. Read More
IMAGINE A WORLD WHERE parasites control the minds of their hosts, sending them to their destruction. IMAGINE A WORLD WHERE parasites are masters of chemical warfare and camouflage, able to cloak themselves with their hosts' own molecules. IMAGINE A WORLD WHERE parasites steer the course of evolution, where the majority of species are parasites. WELCOME TO EARTH. For centuries, parasites have lived in nightmares, horror stories, and in the darkest shadows of science. Yet these creatures are among the world's most successful and sophisticated organisms. In Parasite Rex, Carl Zimmer deftly balances the scientific and the disgusting as he takes readers on a fantastic voyage. Traveling from the steamy jungles of Costa Rica to the fetid parasite haven of southern Sudan, Zimmer graphically brings to life how parasites can change DNA, rewire the brain, make men more distrustful and women more outgoing, and turn hosts into the living dead. This thorough, gracefully written book brings parasites out into the open and uncovers what they can teach us about the most fundamental survival tactics in the universe. Read Less

Goodreads reviews for Parasite Rex: Inside the Bizarre World of Nature's Most Dangerous Creatures

Parasite Rex: Inside the Bizarre World of Nature's Most Dang...

Evolution: The Triumph of an Idea

Microcosm: E. coli and the New Science of Life