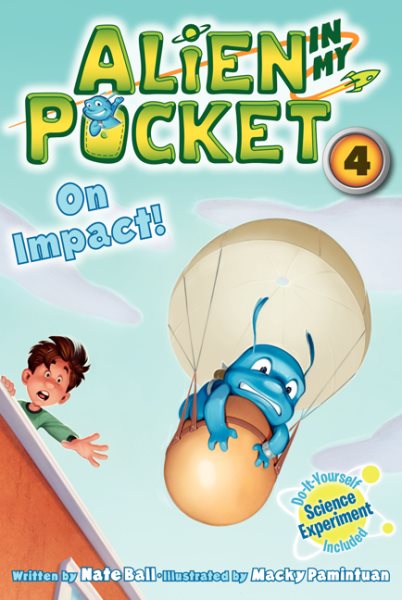 Injured in a bicycle accident, Zack discovers that his alien houseguest has swiped his brakes, placing Zack's baseball season in jeopardy while subjecting him to an annoying little brother. Read More
This must-read Alien in My Pocket book is the fourth in the series by Nate Ball, the host of PBS's Design Squad and Design Squad Nation. In this hilarious new adventure, Zack and his alien friend, Amp, learn about friction, deceleration, and how to soften a crash-landing.When Zack McGee crashes his bike, he's stuck at home with his arm in a sling and his baseball season on the line. What's worse, his bike crashed because his four-inch-tall houseguest, Amp, experimented on the brakes! Now Zack is easy prey for his little brother, Taylor, who's determined to find out once and for all what mysteries Zack has hidden in his pocket.Like every book in the Alien in My Pocket series, On Impact! mixes Common Core&apos;aligned science and safe, hands-on experiments with a hilarious story that young readers will love.Publishers Weekly said of Alien in My Pocket: Blast Off!: "With its screwball comedy and lively dialogue, the novel gives readers the opportunity to laugh as they learn."Supports the Common Core State Standards Read Less

Goodreads reviews for Alien in My Pocket #4: On Impact!

The Magic Mirror: A Branches Book (Once Upon a Fairy Tale #1...