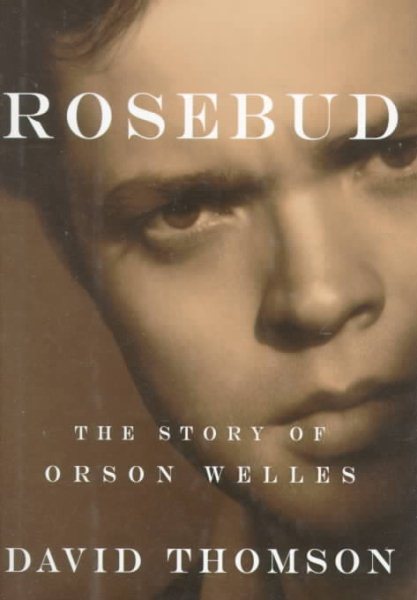 A portrait of the life and career of Orson Welles describes his early success in the worlds of radio, theater, and film; the boredom and self-destructive impulses that led to his rapid decline; and his colorful personal life Read More
David Thomson has brought a lifetime's fascination with Orson Welles and his work to this dazzling biography. Rosebud is written as a story, one that summons up the man and the artist and does justice to the genius and the fraud; the man of the world and the solitary; the spoiled kid and the sage; the infant prodigy; the chronic fabricator of his own legend; the boy who flirted with homosexuals; the ladies' man; the youth who took Broadway and radio by storm, and rocked the nation in 1938 with an airwaves fantasy of invasion; the begetter of the incomparable Citizen Kane.And here, also, is the man who famously "failed," the man who made The Magnificent Ambersons, Touch of Evil, The Trial and Chimes at Midnight. But to Thomson, those allegedly lesser films are the furnishings of another kind of masterpiece, as large and melancholy as Kane's Xanadu. Here Welles reveals himself as at once a monster of self-destruction and a triumph of self-invention.Thomson's view of Welles's "fall" is vital to his grasp of a profoundly complex character. We see Welles as a genius haunted by boredom and by the inability to believe in anything, as a victim of indiscipline and the helpless pleasures of talk. He is a man who attracts people, spurns them and then finds them guilty of betrayal. And so people like John Houseman, Herman Mankiewicz and Rita Hayworth, along with so many others, come and go, astonished.Rosebud traces a career of endless striving and continuous drama. At the same time, it is a book of astute film commentary that helps us appreciate Kane anew as the masterpiece of what is too often a shallow medium. It is written with an insight, a daring and a flair worthy of its remarkable protagonist. Read Less

Goodreads reviews for Rosebud: The Story of Orson Welles

A Biographical Dictionary of Film

Decision-making in the White House: the olive branch or the...