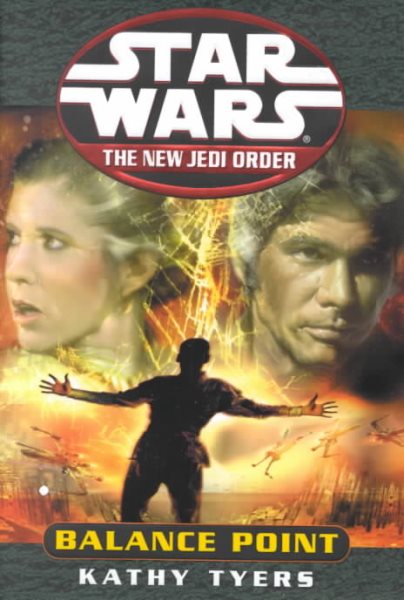 As Han Solo and Leia Organa Solo struggle to help the refugees flooding in to the planet Duro from the Rim worlds invaded by the horrific Yuushan Vong aliens, Jacen Solo must face a crisis of conscience over how to use the Force as a tool for good while battling the evil invaders who have now set their sights on Duro. Read More
Vector Prime, the New York Times bestselling first novel in The New Jedi Order series, boldly ventured into uncharted Star Wars territory, bringing an element of dark tragedy and suspense into the adventures of Luke Skywalker, Han Solo, Leia Organa Solo, and the other legendary figures of that galaxy far, far away. With the passing of Chewbacca, the Republic mourned the loss of one of its greatest heroes. Now veteran Star Wars author Kathy Tyers continues the epic struggle between good and evil as the New Republic, led by the battered but still unbroken Jedi, braces for the next onslaught of its merciless alien foe.Poisoned by centuries of technological excess, the planet Duro is an unlivable hell, long abandoned by its own inhabitants, who dwell above their polluted world in orbital habitats. But there is no place else to channel the flood of refugees fleeing the murderous Yuuzhan Vong. So a deal is struck: In exchange for a new home, the refugees will work to restore the planet to health, under the watchful eye of Leia Organa Solo.As tempers begin to flare between the Duros and the New Republic, and between groups of refugees, Han Solo, his son, Jacen, and the Ryn called Droma arrive to keep the peace. They are unaware that Leia is on Duro . . . and that Luke, Mara, and Anakin are on their way, searching for a missing Jedi apprentice. And none realize that the Yuuzhan Vong have chosen this embattled planet as the next target in their brutal coreward thrust.The unrest only strengthens Jacen Solo's growing belief that a true Jedi should not fight, but should lead others to peace through a deeper understanding of the Force. Now, as the fragile stability on Duro threatens to collapse into violence, Jacen Solo must face his greatest dilemma: At what point does the use of power become aggression? Whatever he decides, his next step could tip the galaxy's destiny toward the light or toward darknessówith the life of someone he loves hanging in the balance . . . Read Less