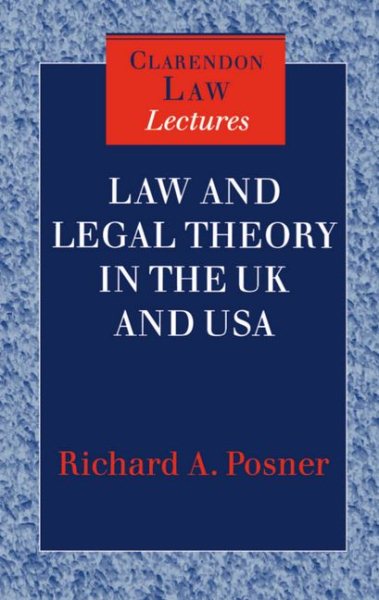 Richard Posner is famous throughout the legal world for his pioneering and controversial espousal of... Read More
Richard Posner is famous throughout the legal world for his pioneering and controversial espousal of the belief that the study of law cannot be divorced from the study of economics. Here, in this volume of essays based upon his Clarendon Lectures, he explores the relationship between the legalsystems of the UK and USA. The essays range widely over themes which will be familiar to many students and teachers of law: in the first essay he compares the work of the two most prominent writers on jurisprudence in the second half of this century, one English (HLA Hart) and one American (RonaldDworkin). His controversial conclusion that trying to define "law" is futile, distracting and illustrative of the impoverishment of traditional legal theory will fascinate students of legal theory. In the second essay he examines a number of English cases drawn primarily from the two fields in whichEnglish and American law overlap most completely - torts and contracts. Here he argues that while in general English judges use their common sense effectively to approximate the results that an economic analyst would recommend they would do even better if they were more receptive to the economicapproach to the common law - if they were, in other words, a little more like American judges. In the third essay he examines the differences between the English and American legal systems at the administrative or operational level as distinct from the jurisprudential and doctrinal levels. Theconclusions drawn from his analysis challenge traditional orthodoxy. His concluding advice to law reformers in both jurisdictions is that piecemeal reform of either system is to be avoided. In this short and highly readable work readers will find much that will delight, stimulate, and challenge them. It is a book to be read by all students and scholars of law. Read Less

An Affair of State: The Investigation, Impeachment, and Tria...