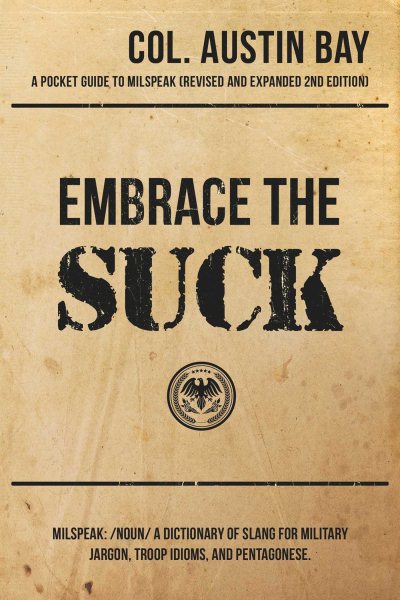 MILSPEAK: Slang for military jargon, troop idioms, and Pentagonese. The perfect gift for anyone who... Read More
MILSPEAK: Slang for military jargon, troop idioms, and Pentagonese. The perfect gift for anyone who is in the military, veterans, or who plans to serve.Members of America&apos;s armed forces have their own distinctive language: milspeak. Especially since WWII, soldiers, sailors, airmen, and marines have invented and adapted their own slang vocabularies, creating a colorful insider&apos;s lingo of bureaucratic buzzwords, acronyms, mock jargon, dark humor, and outright profanity. Milspeak gives a unique and touching insight into military life from basic training to the trenches; from the flightdeck to the cockpit. This comprehensive field manual, complete with descriptive and humorous illustrations, includes more than 500 colorful entries including:  Voluntold: Derisive slang for &apos;I was ordered to volunteer.&apos;  Back to the taxpayers: Navy slang for where a wrecked aircraft gets sent.  Dome of obedience: Slang for a military helmet. Also called a brain bucket or Skid Lid.  Echelons above reality: Higher headquarters where no one has an idea about what is really happening.  Embrace the suck: The situation is bad, deal with it.  Embrace the Suck is the perfect gift for the soldier, sailor, marine, or airman in your life&apos;or for the Beltway Clerk* who yearns to speak like one.   *Derisive term for a Washington political operative or civilian political hatchet man. May refer to so-called &apos;Washington defense experts&apos; who&apos;ve never served in the armed forces.  Read Less

Goodreads reviews for Embrace the Suck

A Quick & Dirty Guide to War: Briefings on Present and Poten...