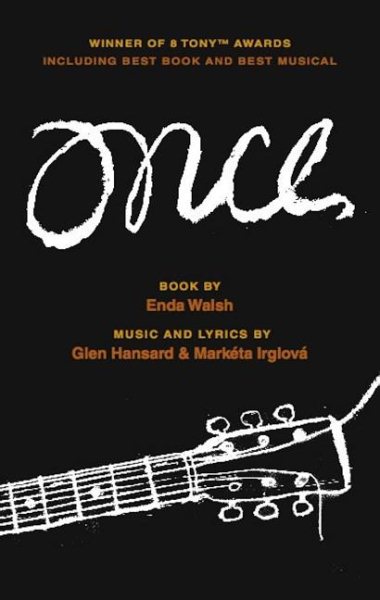 A celebrated new musical based on the Academy Award-winning film. Read More
"A jewel box of a musical: small, delicate, brimming with emotion and charm."&#151;Vogue"It may sound like heresy to fans of the 2006 film, but this bewitching stage adaptation arguably improves on the movie, expanding its emotional breadth and elevating it stylistically while remaining true to the original's raw fragility."?Hollywood ReporterRetaining the film's popular music and lyrics, acclaimed Irish playwright Enda Walsh adapts this charming tale of a complicated romance between an Irish street musician and a young Czech immigrant for the stage. A hit musical Off-Broadway, Once premiered on Broadway in spring 2012 to rave reviews.Enda Walsh is the author of five Edinburgh Festival Fringe First Award-winning plays, including Penelope, The Walworth Farce, and The New Electric Ballroom. He also co-wrote the film Hunger, which won the Camera d'Or award at the Cannes Film Festival.Glen Hansard and Markéta Irglová are the stars and songwriters of the 2006 film Once, for which they won an Academy Award for Best Song. The two comprise the musical folk-rock duo The Swell Season, which is currently touring the United States. A documentary film of the duo, The Swell Season, was an official selection of the 2011 Tribeca Film Festival. Hansard is also a member of the Irish band The Frames and Irglová is a classically trained Czech pianist and vocalist. Read Less

Goodreads reviews for Once

The Walworth Farce and The New Electric Ballroom

The Goddess of the Wu Mountain - First Books for Early Learn...