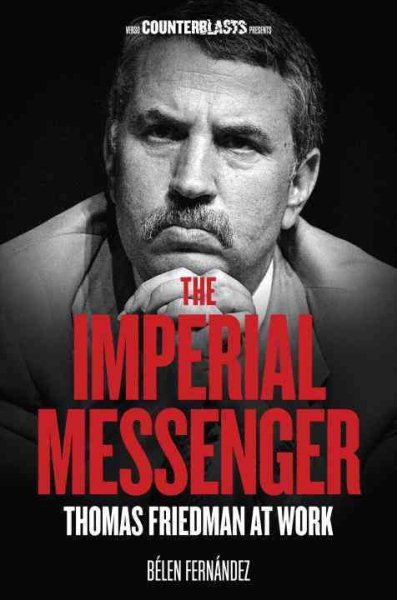 Fernâandez criticizes journalist Thomas Friedman, specifically what she perceives as his jingoism and lack of journalistic integrity. Read More
The Imperial Messenger reveals the true value of this media darling, a risible writer whose success tells us much about the failures of contemporary journalism. Belén Fernández dissects the Friedman corpus with wit and journalistic savvy to expose newsroom practices that favor macho rhetoric over serious inquiry, a pacified readership over an empowered one, and reductionist analysis over integrity. The Imperial Messenger is polemic at its best, relentless in its attack on this apologist for American empire and passionate in its commitment to justice.About the series: Counterblasts is a new Verso series that aims to revive the tradition of polemical writing inaugurated by Puritan and leveller pamphleteers in the seventeenth century, when in the words of one of them, Gerard Winstanley, the old world was “running up like parchment in the fire.” From 1640 to 1663, a leading bookseller and publisher, George Thomason, recorded that his collection alone contained over twenty thousand pamphlets. Such polemics reappeared both before and during the French, Russian, Chinese and Cuban revolutions of the last century. In a period of conformity where politicians, media barons and their ideological hirelings rarely challenge the basis of existing society, it’s time to revive the tradition. Verso’s Counterblasts will challenge the apologists of Empire and Capital. Read Less