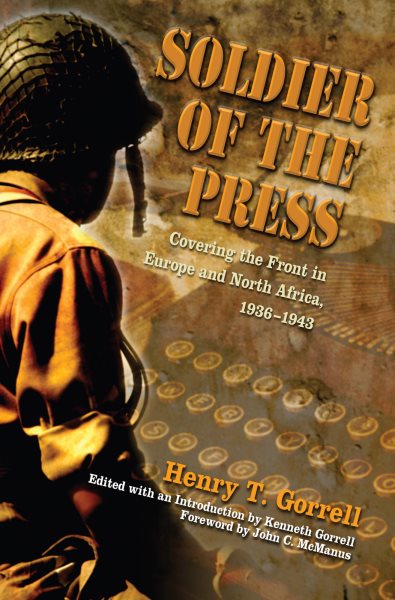 "This memoir by United Press war correspondent Henry T. Gorrell provides eyewitness accounts from the battlefields of the Spanish Civil War and the war fronts in Greece, the Balkans, the Middle East, and North Africa during World War II"--Provided by publisher. Read More
Threatened by each side in the Spanish Civil War with death as a suspected spy, decorated for saving an airman&apos;s life in a bullet-ridden B-24 Liberator over Greece, war correspondent Henry &apos;Hank&apos; Gorrell often found himself in the thick of the fighting he had been sent to cover. And in reporting on some of the world&apos;s most dangerous stories, he held newspaper readers spellbound with his eyewitness accounts from battlefields across Europe, Africa, and the Middle East. An &apos;exclusive&apos; United Press correspondent, Gorrell saw more than his share of war, even more than most reporters, as his beat took him from the siege of Madrid to the sands of North Africa. His memoir, left in an attic trunk for sixty years, is presented here in its entirety for the first time. As he risks life and limb on the front lines, Gorrell gives us new perspectives on the overall conflict&apos;including some of World War II&apos;s lesser-known battles&apos;as well as insights into behind-the-lines intrigue. Gorrell&apos;s account first captures early Axis intervention in Spain and their tests of new weaponry and blitzkrieg tactics at the cost of millions of Spanish lives. While covering the Spanish Civil War, he was captured by forces from each side and saw many brave men die disillusioned, and his writings offer a contrast to other views of that conflict from writers like Hemingway. But Spain was just Hank&apos;s training ground: before America even entered World War II, he was embedded with Allied forces from seven nations.When war broke out, Gorrell was sent to Hungary, where in Budapest he witnessed pro-Axis enthusiasts toast the victory of Fascist armies. Later in Romania he watched Stalin kick over the Axis apple cart with his invasion of Bessarabia&apos;forcing the Germans to deal with the Russian menace before they had planned. Then he saw twenty Italian divisions mauled in the mountains of Albania, marking the beginning of the end for Mussolini.Combining the historian&apos;s accuracy with the journalist&apos;s on-the-spot reportage, Gorrell provides eyewitness impressions of what war looked, sounded, and felt like to soldiers on the ground. Soldier of the Press weaves personal adventures into the larger fabric of world events, plunging modern readers into the heat of battle while revealing the dangers faced by war correspondents in that bygone era. Read Less

Goodreads reviews for Soldier of the Press: Covering the Front in Europe and North Africa, 1936-1943 (Volume 1)

The Creation of the World and Other Business. (Acting Editio...

Pulaos and biryanis: A tribute to Indian cuisine