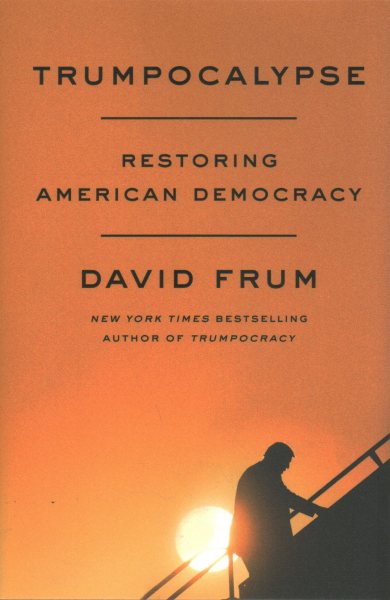 "A huge swath of Americans see the rest of the country building a future that doesn't have a place for them. It's no wonder they'd rather burn it all down. But the fire can be stopped by Americans who act now to protect their country and its democracy"-- Read More
<p><strong>"I don&#39;t take responsibility at all." Those words of Donald Trump at a March 13, 2020, press conference are likely to be history&#39;s epitaph on his presidency.</strong></p><p> A huge swath of Americans has put their faith in Trump, and Trump only, because they see the rest of the country building a future that doesn’t have a place for them. </p><p>If they would risk their lives for Trump in a pandemic, they will certainly risk the stability of American democracy. They brought the Trumpocalypse upon the country, and a post-Trumpocalypse country will have to find a way either to reconcile them to democracy - or to protect democracy from them.</p><p>In <em>Trumpocalypse</em>, David Frum looks at what happens when a third of the electorate refuses to abandon Donald Trump, no matter what he does. Those voters aren’t looking for policy wins. They’re seeking cultural revenge.</p><p>It is not enough to defeat Donald Trump on election day 2020. Even if Trump peacefully departs office, the trauma he inflicted will distort American and world politics for years to come. Americans must start from where they are, build from what they have, to repair the damage Trump inflicted on the country, to amend the wrongs that, under Trump, they inflicted upon each other.</p> <p>Americans can do better. David Frum shows how—and inspires all readers of all points of view to believe again in the possibilities of American life. <em>Trumpocalypse </em>is both a warning of danger and a guide to reform that will be read and discussed for years to come.</p> Read Less