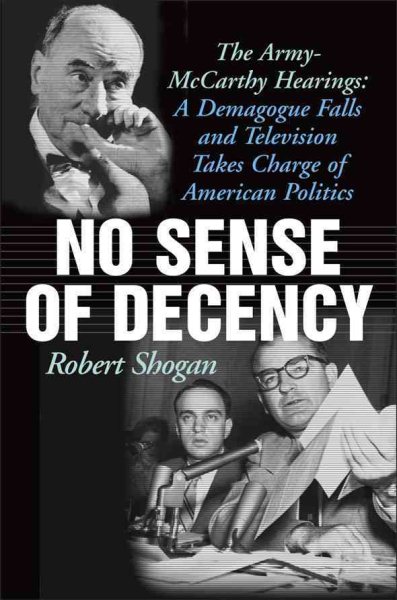 A dramatic account of the 1954 senate hearings that pitted Joseph R. McCarthy against the military, president Eisenhower, and much of the political establishment offers insight into the confrontation's enduring relevance, contending that television assumed a major role in transforming American politics while ultimately failing to counter McCarthyism tactics. Read More
With a journalist&#39;s eye for revealing detail, Robert Shogan traces the 1954 Army-McCarthy Senate hearings and analyzes television&#39;s impact on government. Despite McCarthy&#39;s fall, Mr. Shogan points out, the hearings left a major item of unfinished business—the issue of McCarthyism, the strategy based on fear, smear, and guilt by association. Read Less

Goodreads reviews for No Sense of Decency: The Army-McCarthy Hearings: A Demagogue Falls and Television Takes Charge of American Politics

A Question of Judgement: The Fortas Case and the Struggle fo...

A question of judgment;: The Fortas case and the struggle fo...