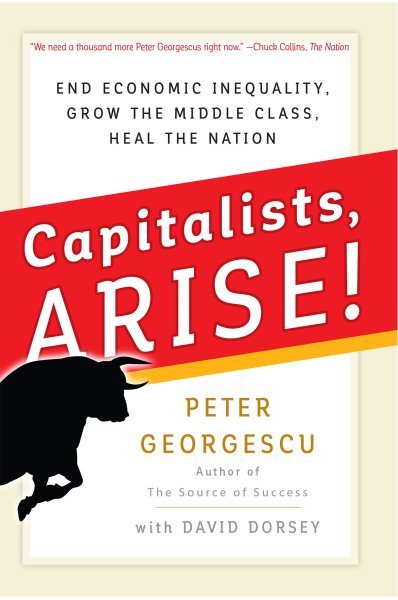 Peter Georgescu explains how his American Dream journey – from refugee to the CEO of Young & Rubicam – is no longer possible and the underlying culprit is shareholder primacy. The income gap is growing larger and larger and Georgescu argues that only a return to a true form of Capitalism will begin to decrease that gap. Read More
Peter Georgescu arrived in this country as a penniless Romanian refugee and rose to become the CEO of Young & Rubicam. This is why he’s so heartsick that with flat wages, disappearing jobs, and a shrinking middle class, his kind of rags-to-riches story doesn’t seem possible now. But he has a message for his fellow CEOs: we’re the ones who must take the lead in fixing the economy. Marshaling deeply sobering statistics, Georgescu depicts the stark reality of America today: a nation with greater wealth inequality and lower social mobility than just about any other country in the developed world. But the problem isn’t that free-market capitalism no longer works—it’s that it’s been hijacked by shareholder primacy. Where once our business leaders looked to the needs and interests of a variety of stakeholders—employees, community members, the business itself—now they’re myopically focused on maximizing their shareholders’ quarterly returns. Capitalists Arise! shows how the short-term thinking spawned by shareholder primacy lies at the root of our current economic malaise and social breakdown. But Georgescu offers concrete actions that capitalists themselves can take to create a better future. The irony is that if businesses do this, shareholders will do even better. In the long run, businesses can thrive only when society is healthy and strong. This book is a manifesto calling on capitalists to heal the nation that has given them so much. Read Less