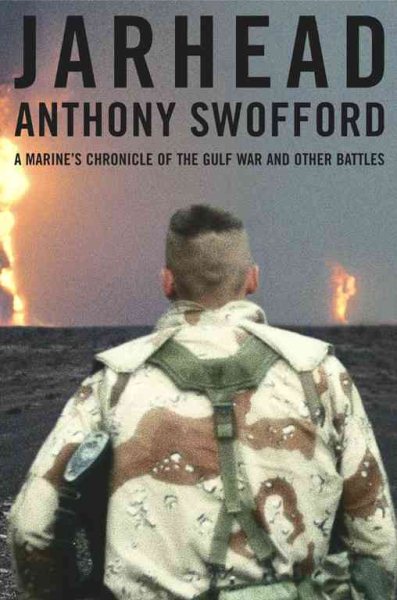 A memoir of the Gulf War by a front-line infantry marine recounts his struggles with the conflict on the front lines, his battles with fear and suicide, his brushes with death, and his identity as a soldier and an American. Read More
Anthony Swofford's Jarhead is the first Gulf War memoir by a frontline infantry marine, and it is a searing, unforgettable narrative. When the marines -- or "jarheads," as they call themselves -- were sent in 1990 to Saudi Arabia to fight the Iraqis, Swofford was there, with a hundred-pound pack on his shoulders and a sniper's rifle in his hands. It was one misery upon another. He lived in sand for six months, his girlfriend back home betrayed him for a scrawny hotel clerk, he was punished by boredom and fear, he considered suicide, he pulled a gun on one of his fellow marines, and he was shot at by both Iraqis and Americans. At the end of the war, Swofford hiked for miles through a landscape of incinerated Iraqi soldiers and later was nearly killed in a booby-trapped Iraqi bunker. Swofford weaves this experience of war with vivid accounts of boot camp (which included physical abuse by his drill instructor), reflections on the mythos of the marines, and remembrances of battles with lovers and family. As engagement with the Iraqis draws closer, he is forced to consider what it is to be an American, a soldier, a son of a soldier, and a man. Unlike the real-time print and television coverage of the Gulf War, which was highly scripted by the Pentagon, Swofford's account subverts the conventional wisdom that U.S. military interventions are now merely surgical insertions of superior forces that result in few American casualties. Jarhead insists we remember the Americans who are in fact wounded or killed, the fields of smoking enemy corpses left behind, and the continuing difficulty that American soldiers have reentering civilian life. A harrowing yet inspiring portrait of a tormented consciousness struggling for inner peace, Jarhead will elbow for room on that short shelf of American war classics that includes Philip Caputo's A Rumor of War and Tim O'Brien's The Things They Carried, and be admired not only for the raw beauty of its prose but also for the depth of its pained heart. Read Less