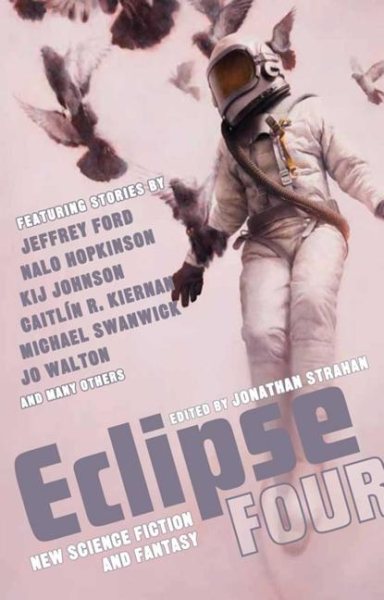 Presents a collection of science fiction and fantasy stories by such authors as Emma Bull, Jeffrey Ford, Michael Stanwick, and Jo Walton. Read More
To observe an eclipse is to witness a rare and unusual event. Under darkened skies the sun becomes a negative image of itself, its corona transforming the landscape into a strange space where anything might happen, and any story may be true...In the spirit of classic science fiction anthologies such as Universe, Orbit, and Starlight, master anthologist Jonathan Strahan (The Best Science Fiction and Fantasy of the Year) presents the non-themed genre anthology Eclipse: New Science Fiction and Fantasy. Here you will find stories where strange and wonderful things happen--where reality is eclipsed by something magical and new.Continuing in the footsteps of the multiple-award-nominated anthologies Eclipse One, Eclipse Two, and Eclipse Three, Eclipse Four delivers new fiction by some of the genre's most celebrated authors, including Andy Duncan's tale of a man's gamble that he can outrun a bullet; Caitlin R. Kiernan's story of lovers contemplating the gravity of a tiny black hole; Damien Broderick's chronicle of a beancounter who acquires a most curious cat; Michael Swanwick's tale of the grey man who pulls an unhappy woman from the path of an oncoming train; Nalo Hopkinson's story of ghosts haunting a shopping mall; and Gwyneth Jones's story of an alien priest who suffers a crisis of faith...Skyhorse Publishing, under our Night Shade and Talos imprints, is proud to publish a broad range of titles for readers interested in science fiction (space opera, time travel, hard SF, alien invasion, near-future dystopia), fantasy (grimdark, sword and sorcery, contemporary urban fantasy, steampunk, alternative history), and horror (zombies, vampires, and the occult and supernatural), and much more. While not every title we publish becomes a New York Times bestseller, a national bestseller, or a Hugo or Nebula award-winner, we are committed to publishing quality books from a diverse group of authors. Read Less

The Best of Kim Stanley Robinson